Apple today seeded the second beta of an upcoming iOS 10 update to developers for testing purposes, two weeks after seeding the first iOS 10.1 beta and three weeks after releasing iOS 10 to the public.

Registered developers can download the new iOS 10.1 beta, Build 14B67, from the Apple Developer Center or over-the-air once the proper configuration profile is installed.

iOS 10.1 includes a new "Portrait" mode for the iPhone 7 Plus that allows it to use the two built-in cameras to create shallow depth of field portrait photos with blurred backgrounds.

Subscribe to the MacRumors YouTube channel for more videos.
To achieve the look, the image signal processor in the iPhone 7 Plus uses images from the wide-angle camera to create a depth map, dissecting the different layers of the photo to decide what to blur. It works on people, pets, and objects, but does require good lighting to achieve the proper effect.

The update also likely includes bug fixes and other under-the-hood improvements to address issues that have been uncovered since iOS 10 was released.

iOS 10 has been described by Apple as the "biggest release ever" for iOS users, with features that include a redesigned Lock screen, a Siri SDK to allow third-party apps to integrate with Siri, and a completely overhauled Messages app with stickers, a full App Store, Digital Touch, Bubble Effects, and more.

Other features include a dedicated "Home" app for HomeKit users, new facial and object recognition capabilities in Photos, and redesigned Maps and Apple Music apps.

Apple has also released a second beta of Xcode 8.1 for developers.

Messages - The Messages App Drawer has been tweaked. There are no longer dots to represent each app installed, and there's a new scroll bar at the bottom. 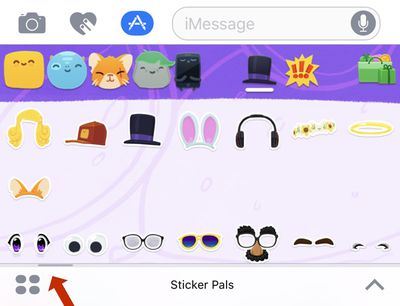 Split-View - It's no longer possible to drag and drop stickers when using Split View mode on an iPad that supports it.

AngerDanger
That is the exact same facial expression I had when Apple introduced this feature at the keynote.

_Refurbished_
All I want to know is if they fixed the iPhone 7's animation glitch.
Score: 6 Votes (Like | Disagree)

what's she looking at?

Apple has posted a workaround. If you are having LTE issues on Verizon, switch to TMobile or AT&T, but not Sprint.

abi12a
Anybody know yet if the "depth effect" isn't blurry around the edges anymore?
Score: 2 Votes (Like | Disagree)
Read All Comments