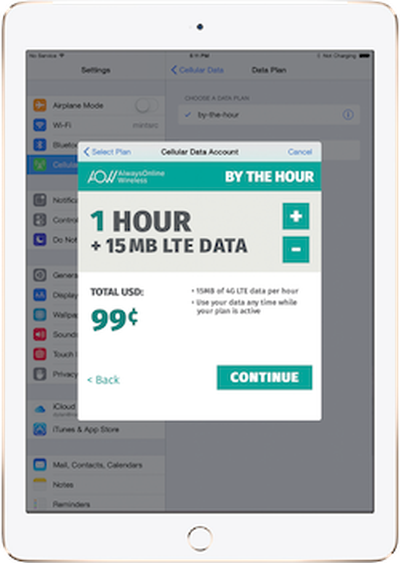 Otono Networks today announced the launch of AlwaysOnline Wireless, a global LTE roaming network exclusively for iPads with Apple SIM. The roaming network will be available in 45 countries, but will expand to additional countries in the future.

AlwaysOnline will offer LTE data plans starting from $0.99 an hour for 15 MB, and users can pay by hour, day or megabyte. Otono CEO Emir Aboulhosn says that the company wants to offer short-term data plans for times customers "really need connectivity on-the-go" like if they need to "catch up on email in the car" or "get directions to their next meeting."

AlwaysOnline's roaming network is available in countries like Canada, Mexico, France, Germany, the United Kingdom, Australia, New Zealand, Israel, Japan, Saudi Arabia and more. However, the network's plans aren't available to the residents of the majority of the countries listed. The full list can be seen on AlwaysOnline's website.

15MB/hr is a joke. Why not give me $1 for 100MB/hr is more like it. You visit websites, stream a video, get a ton of ads forced down your throat, and send one or two emails minus attachments. 15MB is great back in 2007.

This is the same tactic used by american companies.

You go to asia they give you unlimited wifi access at their wifi coffee shops for 30 days - you buy a pass that's around $25 or less. This is typical how us telecoms force-fornicate consumers.

Let's just use an example:

Send some images only in whatsapp - probably 250kb/image. Send some video, that's gonna eat that 15MB real quick. You can basically text for an hour minus sending any multimedia. The plan is pretty ripoff in my opinion.
Score: 17 Votes (Like | Disagree)

This is a great option for people like my parents, who take trips overseas, but don't need mega data plans. They can just log on every once in a while for an hour.

Dude, just about every T-Mobile US plan besides the one for $30/month gives you free overseas data.
Score: 13 Votes (Like | Disagree)

Dude(tte), unlike you, my parents value a functioning network stateside. They are on Verizon and aren't going to settle for T-Mobile. They tried Sprint. Never again.

Tmobile lets you borrow an iPhone to try out their network. Their coverage has expanded by nearly 400% in my area ever since John Legere became CEO. They just surpassed Sprint to become #3 in the amount of customers that they have. Any rumor that you heard about Tmobile that is older than 6 months is already outdated. They're a really good company and they work in every country that I've visited.
Score: 8 Votes (Like | Disagree)

Dude, just about every T-Mobile US plan besides the one for $30/month gives you free overseas data.

Dude(tte), unlike you, my parents value a functioning network stateside. They are on Verizon and aren't going to settle for T-Mobile. They tried Sprint. Never again.
Score: 6 Votes (Like | Disagree)

ILikeAllOS
Nice! Now I can view 2 photos per hour! This is a big step up from my AOL dial up! :D
Score: 5 Votes (Like | Disagree)
Read All Comments