Canadian rapper Drake's hit album "Views" has become the first album on Apple Music to be streamed more than 1 billion times, according to an award Drake shared on Instagram this morning. 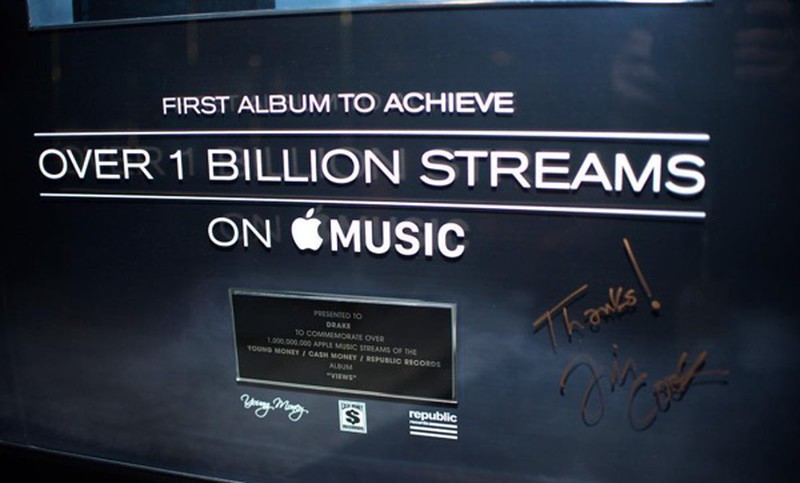 Drake received the news from Apple CEO Tim Cook, iTunes chief Eddy Cue, and Larry Jackson, who heads up original content, all of whom Drake posed with for a second photo that was also uploaded to his Instagram account.

Released on April 29, "Views" was an Apple Music exclusive for one week before it became available on other streaming music services like Spotify and it sold more than 1 million copies during its five-day exclusivity window. Apple and Drake have been working together since Apple Music launched in June of 2015, with Drake offering a Beats 1 radio show and Apple sponsoring his "Summer Sixteen" tour.

🍏🍎 Thank you to everyone. OVO Sound to the 🌎 @applemusic

Just this morning, Drake debuted a 23-minute short called "Please Forgive Me," which is designed to be a visual companion to the "Views" album. The video, which is also an Apple Music exclusive, follows Drake and his girlfriend as they attempt to make off with a wealthy man's fortune. The songs "One Dance," "Controlla," "9," Views," and more are used in the short.
Tag: Apple Music Guide
[ 215 comments ]

lunarworks
But the commenters here told me no one cares about Drake.

Dilster3k
This is silly...
They pretty much helped him with the production of the music / videos, etc. and he was a spokesperson when Apple Music was announced. His music and album was plastered in every playlist, chart, recommendation, radio and cramped into any possible corner of Apple Music...
Unfair & meaningless statistic IMO.
Score: 20 Votes (Like | Disagree)

This is silly...
They pretty much helped him with the production of the music / videos, etc. and he was a spokesperson when Apple Music was announced. His music and album was plastered in every playlist, chart, recommendation, radio and cramped into any possible corner of Apple Music...
Unfair & meaningless statistic IMO.

I agree, this is Unfair!!! A billion isn't such a big number. It doesn't mean what it used to. Heck, that's only one stream for every phone Apple has sold. He will never get close to a trillion-- I guarantee it. I don't find it meaningful at all. People probably don't even like Drake, they only listen to him because Apple makes them, and Apple makes them stream his songs!!! This isn't fair at all!! Time for Tim to go; this reeks of desperation.
Score: 19 Votes (Like | Disagree)

This is silly...
They pretty much helped him with the production of the music / videos, etc. and he was a spokesperson when Apple Music was announced. His music and album was plastered in every playlist, chart, recommendation, radio and cramped into any possible corner of Apple Music...
Unfair & meaningless statistic IMO.

Helped him with the production of the music? Huh? This was executive produced by 40, just as all of Drake's albums have been. There are fewer collaborators on this album than pretty much any prior Drake album.

You think showing up awkwardly on stage at an Apple Keynote for 10 minutes gave him an unfair advantage to get one billion streams?

His music and album are in every playlist because the album sold 1.2M first week, has a #1 and #2 single, and is what the people want to hear.

Give credit where credit is due.
Score: 15 Votes (Like | Disagree)
Read All Comments

Tuesday May 26, 2020 2:31 am PDT by Tim Hardwick
Apple will use a Lightning port instead of USB-C in the upcoming "iPhone 12," but it will be the last major series of Apple's flagship phones to do so, with models set to combine wireless charging and a port-less Smart Connector system for data transfer and syncing in the iPhone "13 series" next year. The above claim comes from occasional Apple leaker and Twitter user "Fudge" (@choco_bit),...
Read Full Article • 355 comments