The Messages App Store has grown to more than 1,650 applications and sticker packs in the nine days since iOS 10 launched to the public, according to new data gathered by Sensor Tower (via TechCrunch). Unsurprisingly, the most popular type of Messages app is the sticker pack, which accounts for 1,251 of the total apps on the storefront. The other 402 include entertainment, news, and gaming-related apps.

Although stickers remain the dominant app category in Messages, due to a handful of fun and free packs users can download, the store is largely outweighed by paid sticker packs. Specifically, there are 944 paid sticker packs on the Messages store, and just 307 free sticker packs. The pricing of the paid packs is mostly at the $0.99 price point (86 percent of the packs cost this much), but there are some that are $1.99 (12 percent), $2.99 (1 percent), and $3.99 (only 1 pack in the entire store is priced at this amount). 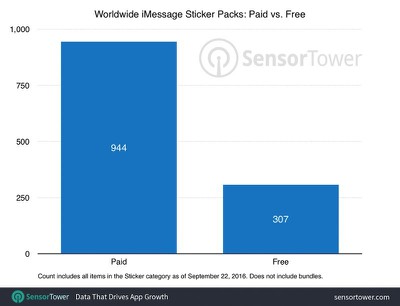 Within the 402 non-sticker apps, games are the most popular experiences, with 91 gaming apps available to download in Messages. It beats the second most-popular category by over half, with Entertainment coming in second (39 apps), followed by Utilities (31 apps), Productivity (26 apps), and Social Networking (25 apps). The new Sensor Tower data does not disclose which apps are the most downloaded by users, however.

Stickers are the easy way to visualize and explain the new features of Messages, but there are multiple useful apps in the App Store that provide streamlined ways to communicate with friends and family members. Fandango allows you to quickly pick a film and showtime to propose a movie date with someone, Square Cash can send money between you and a contact without opening the full app, and OpenTable facilitates dinner decisions through voting on restaurants and even putting down a reservation.

As the Messages App Store continues to grow, older apps are contributing updates that add in Messages functionality -- like Tinder and Fallout Shelter -- alongside all-new apps exclusively designed for Messages. Check out the MacRumors guide for finding and installing sticker packs if you're not sure how to start using the new features in Messages.

keysofanxiety
The new Messages app has destroyed any semblance of maturity I thought I had. I'm like a kid in a candy shop.
Score: 14 Votes (Like | Disagree)

gsmornot
I never thought I would send a Pac-Man to eat a message as a reply but here we are.
Score: 12 Votes (Like | Disagree)

I got the Mario and Peanuts sticker packs the other day. They’re pretty good and provided a little bit of fun for me and some friends. I'm surprised at how many are already available so soon too!

Is their anyway to rearrange the app drawer when you swipe thru the applications? I tend to always use the app that's far away..

Yes. Tap the 4 dots on the left then press and hold on the pack icons until they wiggle and then you can rearrange them.
Score: 7 Votes (Like | Disagree)

0815
Guess I am getting too old for this .... my daughter however is very excited about this stuff.
Score: 4 Votes (Like | Disagree)

jamescobalt
Sounds like Apple probably should have created a sticker marketplace rather than having what will eventually be THOUSANDS of apps just for doing the exact same thing slightly differently.
Score: 4 Votes (Like | Disagree)
Read All Comments

Monday July 6, 2020 7:53 am PDT by Mitchel Broussard
Tom Hanks' WWII drama "Greyhound" is set to premiere on Apple TV+ this Friday, July 10, and ahead of that debut the actor gave an interview with The Guardian discussing the film. "Greyhound" was originally planned to see a theatrical release this summer, and was repeatedly delayed in the wake of the ongoing Covid-19 pandemic. Apple won the streaming rights to the film, and in the new...
Read Full Article • 186 comments

Monday July 6, 2020 2:04 pm PDT by Juli Clover
Ahead of the launch of new iPhones we often see dummy models created based on leaked schematics and specifications, with those models designed to let case makers create cases for the new devices ahead of their release. We got our hands on a set of dummy models that represent the iPhone 12 lineup, giving us our first close look at the iPhone 4-style design and the different size options. Subscri ...
Read Full Article • 85 comments