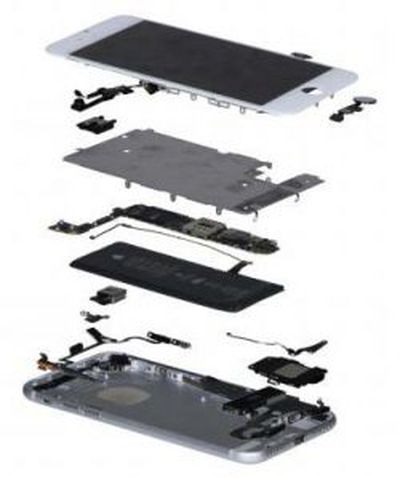 iPhone 7 component costs are estimated to start at $219.80, which is $36.89 higher than iPhone 6s, according to a preliminary teardown [Excel] of a 32GB model by IHS Markit.

The display remains the most expensive component, costing an estimated $43, followed by an Intel modem and other baseband chips worth an estimated total of $33.90.

Apple's quad-core A10 Fusion chip is the third most expensive item on the bill of materials, costing an estimated $26.90. Meanwhile, the larger 1,920 mAh battery is said to cost just $2.50.

iPhone 7's 2GB of RAM supplied by Samsung, and 32GB of flash storage supplied by SK Hynix, are estimated to cost a combined $16.40. An audio codec and audio amplifier supplied by Cirrus Logic, an NFC controller supplied by NXP, a Bosch Sensortec-made barometer, along with an accelerometer, gyroscope, Touch ID, proximity sensor, and other sensors, cost an estimated $14 altogether.

The accessories included in the iPhone 7 box, including a Lightning-to-USB cable, Lightning-to-3.5mm audio adapter, EarPods with a Lightning connector, and 5W USB power adapter cost an estimated $11.80 combined.

IHS raises Apple's total cost to manufacture the iPhone 7 to $224.80 after adding $5 in "basic manufacturing costs" related to assembly, insertion, and testing. A 32GB iPhone 7 Plus costs $649 as a point of comparison.

However, the bill of materials does not factor in costs related to, among other things, research and development, software, licensing costs, and transportation. The accuracy of the component costs is also questionable. Last year, Apple CEO Tim Cook said he has never seen a cost breakdown that is "anywhere close to being accurate," adding that they are generally "much different than the reality."

At least in comparison to IHS estimates for previous iPhones, the iPhone 7's bill of materials is seemingly costlier than the iPhone 6, iPhone 5s, and iPhone 5, each estimated to start at $200, and the iPhone SE at $160.

magicschoolbus
removing the headphone jack must of saved a lot of $ per unit. so courageous of them, saving all of that money.
Score: 33 Votes (Like | Disagree)

ftaok
These cost breakdowns are always so irrelevant. They don't tell much of a story at all.

So all of those parts that Apple buys, like the Intel modem for $33.90, doesn't cost Intel that much to make. So let's pull a number of of the air and say that it costs Intel $13.24 for the modem. Then whoever is supplying the stuff that Intel has to buy to make the modem isn't selling at cost either.

Eventually, it's all free since the air, water, sand, etc to make all of the stuff is available at your local beach. Apple so greedy!

I cringe every September when this post comes out to imply that the iPhone costs $200 to make.
Score: 22 Votes (Like | Disagree)

danakin
Before people lose their spit over how much profit the Cupertonians rake in per device, stop to consider costs for:

I'm sure there are others but those are at the top of my head.
Also if customers and/or suckers (depends on your perspective) choose to dole what what they're asking for, then keep charging what the market will bear. Capitalism folks!
Score: 22 Votes (Like | Disagree)

Small White Car
I know people moan about how these prices aren't accurate don't reflect other costs, but I find the year-to-year comparisons to be quite informative.

It doesn't matter what the actual numbers are, it still shows that Apple is striving to squeeze more into these phones than ever before at the expense of their margins.

now that that's out of the system:

you cannot ever equate raw hardware costs with retail pricing. Hardware costs are only a portion of the total costs that go into each device.

the fact that the iPhone 7 actually comes with industry standard hardware finally (2gb ram, and the 32gb base storage) and is clearly costing Apple more to produce from a hardware standpoint, it's clear that Apple is lowering margins on iPhone sales, which is kind of the opposite of "greedy"
Score: 14 Votes (Like | Disagree)
Read All Comments