Apple has signed some kind of music agreement with Cash Money Records and its co-founder rapper Birdman, marking its first exclusivity deal with a full record label instead of individual artists, reports MusicBusinessWorldwide.

Apple Music head of content Larry Jackson and Birdman himself both confirmed the deal through Instagram posts, with Jackson calling Birdman a "tough negotiator." Details on the deal were not provided, so it is unclear what exactly it might entail. 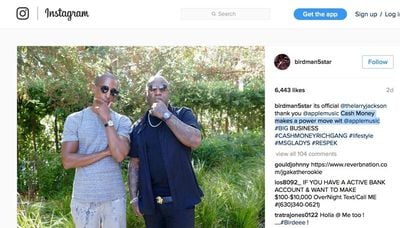 Apple may well have stumped up a big cheque to make it happen, potentially alongside some promotional guarantees regarding both iTunes and Apple Music itself.

One possible option: Apple paid out a weighty advance to Cash Money, at least some of which will be recouped from the label's future Apple Music/iTunes income.

Another: the two parties are co-creating content, whether music or video, which will remain exclusive to Apple.

Apple has worked with closely with Cash Money Records artist Drake in the past, and his latest album, "Views," was an Apple Music exclusive for a week when it launched in April. Drake also appeared at the Worldwide Developers Conference where Apple Music was introduced, and Apple produced the music video for "Energy" using its in-house production team.

Apple executives see exclusive and original content as a way to drive subscribers to Apple Music and they have worked hard to establish deals with artists like Britney Spears, Taylor Swift, and Katy Perry over the course of the last few months. Since its launch in June of 2015, Apple Music has seen steady growth, and as of June 2016, the service has more than 15 million paying subscribers.

Details on what the documentary might be about are not yet available.

robjulo
There is absolutely nothing beneficial for the consumer with exclusive deals. Nothing.
Score: 34 Votes (Like | Disagree)

Good I'll stick with Spotify then I won't have to listen to that garbage.

I forgot that Apple Music has been forcing me to listen to music I dislike. That feature has totally flown under the radar. I better switch to Spotify (I'll purchase a subscription through IAP). :rolleyes:
Score: 22 Votes (Like | Disagree)

DakotaGuy
Good I'll stick with Spotify then I won't have to listen to that garbage.
Score: 15 Votes (Like | Disagree)

Rogifan
Does Apple do deals with anyone besides rappers? And before anyone screams racist, check my avatar.
Score: 10 Votes (Like | Disagree)

Good I'll stick with Spotify then I won't have to listen to that garbage.

Sounds about right for someone living in South Dakota.
Score: 8 Votes (Like | Disagree)
Read All Comments