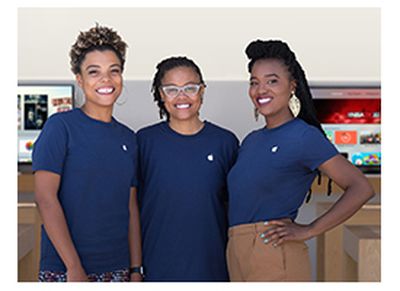 Apple has released updated diversity numbers that reveal its overall workforce, including tech, non-tech, and retail jobs, is 68% male and 32% female as of June 2016, a slight change from a 69%-31% split in 2015.

Apple profiled some of these employees, including Divya, Ryan, Adrienne, Aurelio, Edith, Riad, Charissa, and Kully, and shared a Creating Opportunities page highlighting its diversity programs and partnerships.

"Diversity is more than any one gender, race, or ethnicity. It's richly representative of all people, all backgrounds, and all perspectives. It is the entire human experience."

We see diversity as everything that makes an employee who they are. We foster a diverse culture that’s inclusive of disability, religious belief, sexual orientation, and service to country. We want all employees to be comfortable bringing their entire selves to work every day. Because we believe our individual backgrounds, perspectives, and passions help us create the ideas that move all of us forward.

I'm with Morgan Freeman on this:

Mike Wallace: How are we going to get rid of racism until....?

Morgan Freeman: Stop talking about it.

Morgan Freeman: and I'm going to ask you to stop calling me a black man. I know you as Mike Wallace. You know me as Morgan Freeman.
Score: 60 Votes (Like | Disagree)

Apple Knowledge Navigator
I will never understand the significance of reports such as this. Yes, diversity is a wonderful thing and shouldn't even be an issue in 2016 - but surely the person most qualified should be given the job, regardless of whether they are black, white, gay, straight or whatever you like.
Score: 46 Votes (Like | Disagree)

bbeagle
I would argue that Apple is TOO diverse.

Benjamin Frost
I'm so sick of all this diversity crap.

LISTEN UP, APPLE: the only thing that matters is merit. If 100% of your workers are white, male and middle-aged, I couldn't be more delighted, as long as they are hired on merit and merit alone.

To be pro-diversity is to be anti-merit. It's no wonder Apple is going to hell in a handcart with Tim Cook at the helm and his insufferable prejudice against hiring the best man for the job.
Score: 21 Votes (Like | Disagree)

I would argue that Apple is TOO diverse.

Your being too nice. After the last 20 years we now know that these numbers are indicative of pure racism, but it is the politically correct form of racism, so no worries. As long as the politically correct races end up on top or preferred, its not really a problem in the eyes of current racists.
Score: 19 Votes (Like | Disagree)
Read All Comments