In addition to expanding its retail footprint in China over the past few years, Apple is moving ahead with new stores in other countries. 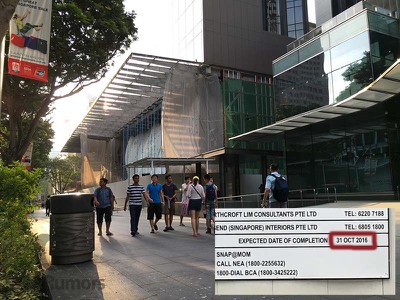 Photos obtained by MacRumors from reader Myles today reveal progress on Apple's first retail store in Singapore, a location that has been confirmed by Apple since November 2015 and under renovation since earlier this year. Construction of the store's glass facade and canopy is now well underway.

The project allegedly has an expected completion date of October 31, 2016, suggesting that the store could open as early as November.

Additional photos sent to MacRumors by reader Rodrigo show an Apple-like large, black construction barrier at Mexico City's Via Santa Fe, an upscale wing of Centro Santa Fe, the largest shopping mall in Latin America. The store will be located on the upper level of the shopping mall and is likely in the early stages of renovations.

Tuesday April 13, 2021 10:45 pm PDT by Juli Clover
The upcoming 2022 iPhone lineup will feature two 6.1-inch devices and two 6.7-inch devices, with no mini-sized 5.4-inch iPhone, well-respected Apple analyst Ming-Chi Kuo said in a note to investors that was seen by MacRumors. Two of the iPhones will be high-end models and two of the iPhones will be lower-end models, similar to the current iPhone 12 lineup. Apple introduced the 5.4-inch...
Read Full Article • 169 comments