Amidst the recent flurry of videos and images of iPhone 7 mockups coming out of China, one pair of pictures that emerged over the weekend claims to offer evidence of Apple's successor to the first iteration 12.9-inch iPad Pro.

Sent in to AppleInsider and said to originate from a Chinese supplier, the combined image below shows a device identified with model number MH1C2CD/F, which has yet to be assigned to an iPad by Apple so far. 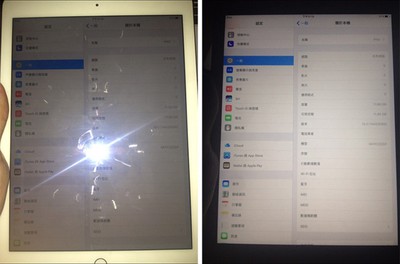 While the identifier proves little, the nomenclature is in line with Apple's existing numbering convention for its iPad Pro range, and Apple is due to refresh its largest tablet this fall.

AppleInsider notes that the device's screen shows a 12GB capacity, which is just enough for installing an OS and apps for internal testing and debugging, suggesting the device could be a pre-production model or prototype.

Based on previous updates to the company's tablet range, customers can expect a new 12.9-inch iPad Pro to feature a faster A10X processor and a better camera, with a good chance it will inherit the True Tone display seen in the 9.7-inch iPad Pro. 3D Touch is also a possibility, although Apple would need to have overcome the challenges involved in porting the technology to a larger screen.

Apple is also expected to launch thinner and lighter MacBook Pro models this fall, with some rumors suggesting a dynamic OLED touch panel could feature as part of a planned redesign.

rudychidiac
I don't care about hardware upgrades for the iPad pro as much as I care about making iOS 10 optimised for it
Score: 25 Votes (Like | Disagree)

Zarniwoop
Inspired by the baby-fusion drive, iPad Pro 2 comes now with outstanding nano-SSD(TM) system with 12GB of storage that is a cache buffer for iCloud 128Gb storage. "This is what our customers have been asking for. It's unprecedented. One Gigabyte for every inch there is!"
Score: 15 Votes (Like | Disagree)

zedsdead
Weight should be the highest priority....after making the software significantly more optimized. The most disappointing thing about iOS 10 was the lack of iPad specific features.
Score: 14 Votes (Like | Disagree)

Nothing new to see here.

They are calling it iPad Pro 2 Pro. The extra Pro at the end makes it $200 costlier.
Score: 10 Votes (Like | Disagree)
Read All Comments

Friday June 18, 2021 9:41 am PDT by Sami Fathi
After a long wait, YouTube for iOS is officially gaining picture-in-picture support, allowing all users, non-premium and premium subscribers, to close the YouTube app and continue watching their video in a small pop-up window. In a statement to MacRumors, YouTube says that picture-in-picture is currently rolling out to all premium subscribers on iOS and that a larger rollout to all US iOS...
Read Full Article • 173 comments