Apple Pay today expanded to France, marking the availability of the payment service in a total of eight countries (via iPhoneAddict.fr). MasterCard and Visa credit and debit cards issued by Banque Populaire, Ticket Restaurant, Carrefour Banque, and Caisse d'Epargne can now be added to Apple Pay on eligible devices.

According to the Apple Pay France website, both Boon and Orange plan to add Apple Pay support in the near future, further expanding the availability of Apple Pay in the country. 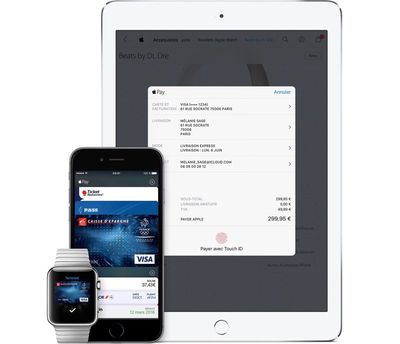 Cards can be added to Apple Pay by tapping the "Add Credit or Debit Card" option in the Wallet app on a device running iOS 8.1 or later. Apple Pay works with the iPhone 6 or later or the iPhone 5 or later when using an iPhone paired with an Apple Watch. Apple Pay in apps is also available on iPads with Touch ID, including the iPad Air 2, iPad mini 3, iPad mini 4, and both iPad Pro models.

Apple Pay is accepted at a wide range of retailers in France, including Bocage, Le Bon Marché, Cojean, Dior, Louis Vuitton, Fnac, Sephora, Flunch, Parkeon, Pret, and more. Apple Pay payments can also be made at any location that accepts contactless payment options.

Apple Pay is now available in the United States, the UK, China, Australia, Canada, Switzerland, Singapore, and France, and Apple plans to expand the service to Hong Kong and Spain later in 2016.

I think that apple pay is really unnecessary (there is already NFC VISA cards). I would rather have a paying system that bypass the VISA-MasterCard monopole. Directly from your bank account.

Do you think that a camera on the iPhone is "unnecessary"? There are already SLR and point and shoot cameras.
Score: 14 Votes (Like | Disagree)

Santabean2000
Apple Pay is awesome - I find myself using it a lot. Roll on the world!
Score: 6 Votes (Like | Disagree)

melliflu
Small impact - Banque populaire and Caisse Epargne represent less than 10% of the French market. Ticket restaurant are pre-paid cards offered by companies to their employees to buy meals.
Score: 4 Votes (Like | Disagree)

MH01
The real question is, has Pokemon launched in France!!

Welcome France to Apple Pay , it's a great service
Score: 3 Votes (Like | Disagree)