Apple shares rose above $100 in intraday trading today for the first time since June 6, just weeks after the stock hit its latest bottom around the $92 mark.

AAPL is up over 1 percent on the day at the time of publishing, contributing to a slight rise in the Dow Jones stock index on the day.

Beyond a short-lived rebound in March and April, Apple shares had steadily declined since the second half of 2015. Some investors have expressed concerns over Apple's recent slowdown, including its first quarterly revenue drop since 2003 and first-ever drop in iPhone sales last quarter.

AAPL is still trading for markedly lower than its year-ago price of around $132, but some analysts believe the stock is undervalued and due for a breakout.

A few weeks ago, analyst Brian White of Wall Street brokerage firm Drexel Hamilton listed AAPL as a "buy" based on a target price of $185. Other firms like Goldman Sachs and S&P Capital IQ, a division of McGraw Hill Financial, have set lower price targets of between $120 and $130 in recent months. 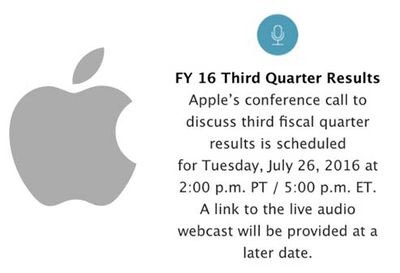 DakotaGuy
At some point Apple is going to need to find another big hit, because so much rests on one product line right now. The Macs have been neglected, the iPad continues to steadily drop in sales and the watch is nothing more then a hobby at this point.

Sure Apple's rich and making tons of money, but if the iPhone ever falls from grace things will look A LOT different financially for Apple.
Score: 5 Votes (Like | Disagree)

Rogifan
Typical run up before earnings; the stock will get hammered the day after earnings.
Score: 4 Votes (Like | Disagree)

Chupa Chupa
Fantastic. Now it's only down about $32 for the past 52 weeks. But positive it didn't break 90.
Score: 4 Votes (Like | Disagree)

At some point Apple is going to need to find another big hit, because so much rests on one product line right now. The Macs have been neglected, the iPad continues to steadily drop in sales and the watch is nothing more then a hobby at this point.

Sure Apple's rich and making tons of money, but if the iPhone ever falls from grace things will look A LOT different financially for Apple.

I think that era has sailed. Increasingly TC and co seem focused on aggregate revenue, esp. from services, rather than thinking big. Of course, I'm also not sure TC can think big given his resume -- he's a bean counter at heart, a PC bean counter. Of course there is the pie-in-the-sky stuff like iCar, but seems like $ down a rat hole to me given the competition.

Case in point, Apple had all the elements of voice controlled, geofenced home automation well before most anyone else in the industry. Siri, ATV, OS X, iOS, hundreds of millions of iPhones in the wild. If TC had put Apple's full concentration on both homekit's backend and creating reference products to make it understandable to average people it could have been a huge "thing" to push iDevices, ATV, and also create a new revenue stream in HomeKit devices.

Instead squandered its resources and lead gave it to Amazon, Samsung, and Google. It's amazing to me how fast consumers attached themselves to Alexa. That should have been Apple's market w/ Siri.
Score: 4 Votes (Like | Disagree)

At some point Apple is going to need to find another big hit, because so much rests on one product line right now. The Macs have been neglected, the iPad continues to steadily drop in sales and the watch is nothing more then a hobby at this point.

Sure Apple's rich and making tons of money, but if the iPhone ever falls from grace things will look A LOT different financially for Apple.

I think it's actually good that Apple has neglected the Mac for a while. The longer people have to wait buying a new model, the more they're willing to actually do so. There'll be more and more excitement for new Macs for sure. Think about it, there's a lot demand for that rumoured new MacBook Pro with OLED bar. I don't think people would be as excited about a new MacBook if Apple would've released it just a year after the previous model. It may not be intentional, but I see this as a pretty good marketing strategy. At the same time it is kinda sad that they haven't released any minor upgrades whatsoever.

As for the Apple Watch I don't really agree. It's a fact that the watch is doing great at this point. Sales have dropped in the past months, but that was to be expected. People are expecting a new model this September (heck, many thought Apple Watch 2 would be announced during the last WWDC), so they're currently just waiting. Even so, people get more excited about the current model thanks to the changes coming with watchOS 3. As a beta user of it, I can totally agree with those people saying that the watch will be more powerful than ever before. It's a huge upgrade in terms of speed and stability.

I do have to agree with your point about the iPad though. After iOS 9, I though Apple finally understood how important it is to make their tablet a true laptop replacement without actually replacing iOS with OS X/macOS. That's why I've had this thought that iOS 10 would come with some other major changes to make the iPad truly a powerful enterprise device, but it disappoints at that level. I am very happy with iOS 10 in general, but for both iPad and power users it just lacks at so many levels. Take the number of icons at the home screen for example. It's sad that Apple still hasn't increased the number of rows or columns with at least one, or that you cannot have widgets on the same screen as the regular lock screen etc. Apple was always about iOS taking advantage of that big canvas of a display, but only apps do this. And the new Mail and Notes app in iOS 10 do look nice with their three-pane view. But that's all. Overall, iPad isn't what it's supposed to be. Something they're gonna have to think about if they want it to at least sell a bit. Now, it is quickly becoming an iPod-like device. Less and less people are going to use it. And before you know it, the category will be gone from the top bar at Apple's website. Sad, but it looks like it's gonna be a realistic thought. :P

Sorry for the huuuuuge piece of text, just wanted to give you my thoughts on this whole thing.

* Neglecting Macs seems like some kind of a marketing trick to get more and more excitement about future models.
* Apple Watch isn't just a hobby in my opinion, it's way more than that, and watchOS 3 is bringing a lot improvements to the watch.
* iPad isn't what it is supposed to be. Apple calls it a laptop replacement, but it's nowhere near that. iOS needs more improvements to let the iPad take advantage of the big screen.
Score: 3 Votes (Like | Disagree)
Read All Comments

Thursday January 27, 2022 12:08 pm PST by Juli Clover
Apple today seeded the first betas of iOS 15.4, iPadOS 15.4 to developers for testing purposes, adding a slew of new features to the latest iOS operating systems. iOS 15.4 is the biggest update that we've had to iOS 15 to date, and it brings Universal Control, Face ID with a mask, new emojis, and tons more. Face ID With a Mask With iOS 15.4, there is now an option to unlock your iPhone...
Read Full Article • 61 comments

Wednesday January 26, 2022 6:00 pm PST by Juli Clover
Apple is working on a new payments service that will allow iPhones to accept payments directly on device with no additional hardware, reports Bloomberg. Right now, iPhones can accept credit cards with add-ons like the Square Reader, but Apple's new technology will eliminate the need for a third-party product. Individuals and small businesses will be able to accept payments with the tap of a...
Read Full Article • 137 comments

Wednesday January 26, 2022 10:19 am PST by Juli Clover
Apple today released macOS Monterey 12.2, the second major update to the macOS Monterey update that launched in October. macOS Monterey 12.2 comes over a month after the release of the 12.1 update, which brought SharePlay support. The ‌‌‌macOS Monterey 12.2‌‌ update can be downloaded on all eligible Macs using the Software Update section of System Preferences. Apple has also...
Read Full Article • 193 comments