Apple CEO Tim Cook admitted that iPhones are too expensive in India, during an interview with Indian news channel NDTV on Monday, the last day of his weeklong visit to the country (via TechCrunch).

According to a recent report from Deutsche Bank, India is among the most expensive places in the world to buy an iPhone. Prices there average 31 percent higher than the U.S., with only iPhones in Sweden, Indonesia, and Brazil proving more costly. 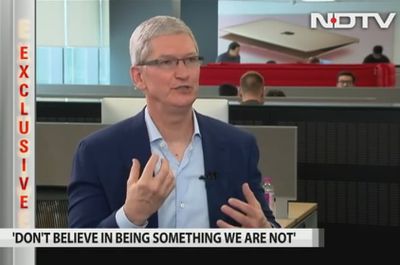 NDTV's Vikram Chandra broached the subject with Cook on air. "You've got an iPhone here which is more expensive than it is in the U.S., with less functionality than it would have in the U.S., and in a country where purchasing power is a fraction of what it is in the U.S.," Chandra said.

Cook acknowledged the disproportionate cost by suggesting that the iPhone was overpriced rather than too expensive. "The duties and the taxes and the compounding of those takes the price and it makes it very high. Our profitability is less in India, it's materially less — but still I recognize that prices are high," he said.

"We want to do things that lower that over time, to the degree that we can," Cook continued. "I want the consumer in India to be able to buy at a price that looks like the U.S. price."


Chandra's interview covered a few more topics, including how Apple saw itself investing in its Indian presence. "What we see here is talent," said Cook. "That means getting the development community moving on iOS. We're also using a lot of skills in India for maps – the maps facility will be several hundred million dollars worth of work."

Cook also said the company wants to bring all its existing services to India, including Apple Pay, and that if the need arose to offer something unique in the country, Apple would look at that too, although he acknowledged the possible cultural limitations: "I don't believe personally in trying to be something you're not. We are what we are. We're a California company."

The interview rounded off Tim Cook's weeklong trip to India, during which he met with Prime Minister Narendra Modi, mingled with Bollywood stars, watched a cricket game, visited temples, and attended business meetings in Mumbai.

smacrumon
They're actually too expensive worldwide.

In comparison to computer devices in general. Computers are a basic human right. There is no reason why iPhone, with its insanely cheap manufactured cost price, is incredibly expensive and overpriced making it unattainable for many individuals.

A "basic human right"? Maybe for those like you, The Fresh Prince of Bel-Air. Try telling those people in India where 1 billion people have no access to fresh water or sanitary living conditions or a roof thats not made out of cardboard. If I didn't think you were bereft of grey matter I'd actually laugh at your ludicrous and offensive comment.
Score: 20 Votes (Like | Disagree)

They're actually too expensive worldwide.

Why are you intentionally not including US taxes?

keysofanxiety
Not just in India, I'm sure many would argue :)
Score: 10 Votes (Like | Disagree)

DaveWotzit
Certainly to expensive in the UK. :(
Score: 10 Votes (Like | Disagree)

Why are you intentionally not including US taxes?

His US taxes aren't included because it doesn't fit his narrative.:rolleyes: It's easy to rail about a $100 difference. Not so much about a $10 difference. To be fair, the iPhone cost in certain countries is quite high. But that doesn't mean people should dismiss half the facts just to make a point.
Score: 10 Votes (Like | Disagree)
Read All Comments