Apple to Hire 4,000 Employees in Hyderabad, India to Work on Maps Development

In line with previous rumors and confirmations, Apple today announced the opening of a new development center in Hyderabad, India focused on Apple Maps development. 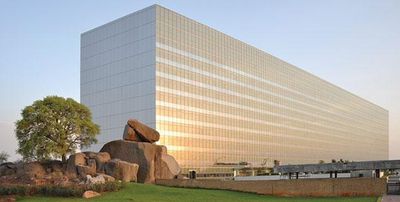 WaveRock campus in Hyderabad, India
The new center, launched in partnership with RMSI, will employ up to 4,000 workers, with the announcement coming as part of Tim Cook's ongoing trip to China and India.

“Apple is focused on making the best products and services in the world and we are thrilled to open this new office in Hyderabad which will focus on Maps development,” said Tim Cook, Apple’s CEO. “The talent here in the local area is incredible and we are looking forward to expanding our relationships and introducing more universities and partners to our platforms as we scale our operations.” [...]

“Apple is one of the most innovative companies in the world and we are very proud they chose us to partner with for this important project,” said Anup Jindal, RMSI’s CEO. “We are experts in geospatial data and we will be hiring thousands of people from the local area to support this effort.”

According to previous reports, the new center at Tishman Speyer's WaveRock campus in Hyderabad is 250,000 square feet, with Apple investing $25 million in the project.

The news comes a day after Apple announced plans to open an iOS App Design and Development Accelerator in Bangalore, India. That center, intended to aid Indian app developers in adopting Apple's Swift programming language and help with development and one-on-one app reviews, is planned to open early next year.

swingerofbirch
After many years, Siri still believes the closest ER to me is a veterinary hospital. If I ask it a different way, it responds with a historic mental health hospital that's now a museum. If another slightly different way, I get an Urgent Care a half our away. There are two actual emergency departments only miles from my home. I've reported this to Apple Maps many times, and it's never fixed.

Google Now and Google Maps are so far ahead of Apple. I use a feature on maps.google.com where I give it a date and time I need to be at a location and it tells me when I'll need to leave the house by based on historical traffic. It's really amazing.

I wish there were a way to set depressing the home button on my iPhone to bring up Google Now rather than Siri and to use Google Maps instead. Apple is just way behind.
Score: 38 Votes (Like | Disagree)

"We are experts in geospatial data and we will be hiring thousands of people from the local area to support this effort."

There is no way this area has 4,000 geospatial engineers for the grabs.
Basically he says "We will be hiring thousands of peasants to manually enter stuff into the database which we cannot possibly scan or automate in any other way"
Score: 22 Votes (Like | Disagree)

I have a Macbook pro, an iPad, an iPhone, a Mac Pro, and with this move, I'm not buying anymore. It was okay with Foxconn, companies have to do that to stay competitive, but Apple is comprised of a bunch of greedy tax dodgers who don't give a damn about our America. I'm done with the rotten Apple.

Amen. I hear you. All the while Cook and Obama have a good chuckle over it. Apple is traitorous! These should be AMERICAN JOBS! When will we refuse to tolerate this? When? We can stop this, but we don't. Do we all want to be unemployed?

How lame is that - By that token , every Indian or Chinese should stop buying Apple or Dell because they are based out of America and give a damn about their nation?
Your country is great today because it always believed in the power of keeping markets free.. It took the Chinese and Indians a century+ to realize that ..
I hope you do realize that your statement goes against the very principle of that!

I hope you also do realize that your economy cannot work in isolation - The world consumes your services and products (which obviously you do not have a problem with) and you consume services and products from other countries too (which inexplicably is not acceptable to you and reeks of treason!)

What if the Chinese and Indians decide to stop doing business with the US altogether?
Obviously it would hit them hard but would cripple the American economy too..

On a different note, I find it disturbing how ultra right nationalism is on the rise everywhere in the last decade or so - Whether it be India or elsewhere
Score: 21 Votes (Like | Disagree)

akfgpuppet
They should have had this many employees working on Maps before they released the application.
Score: 18 Votes (Like | Disagree)
Read All Comments

Wednesday August 17, 2022 9:51 am PDT by Juli Clover
Apple is aiming to hold its first fall event on Wednesday, September 7, reports Bloomberg's Mark Gurman. The event will focus on the iPhone 14 models and the Apple Watch Series 8. The standard iPhone 14 models are expected to get few changes, but the iPhone 14 Pro models will include updated camera technology, the removal of the notch in favor of a pill-shaped and hole-punch cutout, an A16...
Read Full Article • 163 comments