As Apple gears up to introduce OLED displays in the 2017 iPhone, the impact is already being felt in the company's supply chain. During a recent earnings call, Applied Materials, a company that creates equipment for making displays, reported a fourfold increase in orders.

According to Bloomberg, the growing demand for new display manufacturing equipment from Applied Materials serves as evidence that display makers are retooling their processes to produce OLED displays for Apple's line of iPhones in 2017. 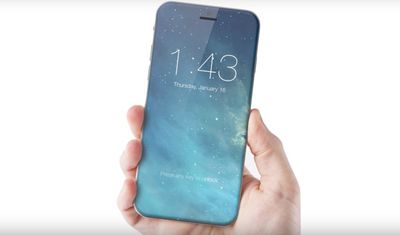 Edge-to-edge iPhone concept image via ConceptsiPhone
Applied Materials executives did not mention Apple by name during the earnings call, but CEO Gary Dickerson dropped some hints in a statement given to Bloomberg, pointing towards long term, sustainable growth and naming the "leader" of mobile products.

"It's not a peak or a one-time event," said Applied Materials Chief Executive Officer Gary Dickerson. "This is going to be sustainable growth. We all know who is the leader in terms of mobile products."

Applied Materials says it takes as long as three quarters to build, deliver, and install its machines, so a ramp up in purchases now means display suppliers are preparing to make some major changes in the coming months.

There are a wealth of rumors suggesting Apple will debut OLED displays in the 2017 iPhone. Apple has already inked a deal with Samsung to secure 5.8-inch OLED displays for future iPhones, and the company may also be preparing to purchase displays from suppliers like AU Optronics, LG Display, and Sharp. Apple is the largest customer for Sharp, LG Display, and Samsung, and all three companies have ramped up display spending in recent months, according to Bloomberg.

An OLED display would eliminate the need for the backlighting that's used in traditional LCDs, allowing Apple to cut down on the thickness and weight of the display used in the iPhone 7. OLED displays also offer better contrast ratio, truer colors, improved viewing angles, better power efficiency to maximize battery life, and a faster response time than an LCD for faster refresh rates.

While the 2017 iPhone is more than a year away, there have already been dozens of rumors about the device due to the significant changes Apple is planning to introduce. Some of the features rumored for the 2017 iPhone (perhaps called the "iPhone 8") include wireless charging, an edge-to-edge bezel-free display with an integrated Touch ID fingerprint sensor, a glass body, and more advanced biometric features.

arggg14
So basically the iPhone 7 is going to suck
Score: 25 Votes (Like | Disagree)

uid15
AMOLED speculation aside, who on earth thought that there'll be an iPhone screen which covers the ENTIRE front glass surface area, bar the front camera, prox/ALS and earpiece? Go back to design school... or maybe just enroll there, period, and possibly take up engineering and some form of human interaction study, you NEED it. Failing that, you'd be a good candidate for helping with Samsung's El Bizarro designs.

Wow, what a messy, unrealistic concept.
Score: 9 Votes (Like | Disagree)

Sedulous
Now if only Apple could get the phone thinner so it can serve as a cheese cutter.
Score: 9 Votes (Like | Disagree)

dannyyankou
I think the iPhone 8 will come sooner than we think.
Score: 8 Votes (Like | Disagree)

Edd.Dantes
I bet they change their release cycle, real fast.

2016 is gonna be a bust. Expect June, or earlier, next year.
Score: 5 Votes (Like | Disagree)
Read All Comments

Friday December 2, 2022 10:54 am PST by Juli Clover
Google is continuing on with its attempt to convince Apple to adopt the RCS messaging standard, publishing a new "it's time for RCS" blog post. Promoted heavily by Google, RCS or Rich Communication Services is a messaging standard that is designed to replace the current SMS messaging standard. It provides support for higher resolution photos and videos, audio messages, and bigger file sizes, ...
Read Full Article • 635 comments

Monday December 5, 2022 11:44 am PST by Juli Clover
Due to production issues at Apple supplier factories in China, the iPhone 14 Pro and iPhone 14 Pro Max are backordered and basically out of stock at every store. If you were planning to gift or receive an iPhone 14 Pro model for the holidays and didn't already get one, you're basically out of luck because they're gone until late December. Subscribe to the MacRumors YouTube channel for more ...
Read Full Article • 186 comments