Uber has announced it is currently testing self-driving car technology with a view to completely remove the need for drivers from its ride-hailing service.

According to a statement by the company posted online yesterday, the initial testing phase is being conducted on the streets of Pittsburgh, using a hybrid Ford Fusion fitted with various sensors including radar, laser scanners and cameras. 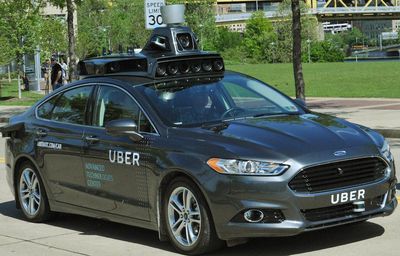 The test vehicle from Uber's Advanced Technologies Center (ATC) collects mapping data as it travels, while a trained driver monitors operations in the car at all times.

The driverless project is being carried out in partnership with Pittsburgh's Carnegie Mellon University. Uber says it is pursuing the goal of inducting autonomous vehicles into its fleet by 2020.

Real-world testing is critical to our efforts to develop self-driving technology. Self-driving cars have the potential to save millions of lives and improve quality of life for people around the world.  1.3 million people die every year in car accidents — 94% of those accidents involve human error. In the future we believe this technology will mean less congestion, more affordable and accessible transportation, and far fewer lives lost in car accidents. These goals are at the heart of Uber’s mission to make transportation as reliable as running water — everywhere and for everyone.

There have been indications suggesting Apple is exploring autonomous vehicles for its own car project, codenamed "Titan", but sources say the first car it releases will not be driverless, with that functionality perhaps coming at a later date.

One Bad Duck
As a robot is driving the taxi they are forgetting a vital part of the artificial intelligence, such as the robots views' on immigration as well the actual location of flight MH370.
Score: 20 Votes (Like | Disagree)

Mactendo
I can imagine the day when you'll be able to call a driverless taxi and it will take you whereever you want without a driver inside. To us, the first adopters, this will be so eerie.

But our grandkids will wonder:
What? You want to drive a car yourself? Are you crazy?!
Score: 9 Votes (Like | Disagree)

keysofanxiety
A decade ago, the sheer prospect of driverless cars becoming mainstream was a fantasy. A decade from now, we could be looking back and wondering how we ever did without.
Score: 8 Votes (Like | Disagree)

RichTF
This shouldn't surprise anyone, smart move by Uber. They're proving to be a very smart and forward-thinking company, way more than just a cheap taxi alternative.
Score: 6 Votes (Like | Disagree)

Sandstorm
Exciting times to be alive and witness all of this. I can remember me as a kid, fantasizing about autonomous cars (probably influenced by shows like Knight rider), but I seriously didn't expect it to happen for real, or at least in my lifetime. And we're almost there. It's really happening. Awesome!
Score: 5 Votes (Like | Disagree)

But how would Uber's automatic-driving cars fuel up/charge up? Either they have to pass that responsibility onto the customer, or have the car drive back to Uber employees/volunteers to fill up in between rides.

Maybe they can automatically drive to some fill up stations uber make an agreement for filling up and bill to them
Score: 4 Votes (Like | Disagree)
Read All Comments