Apple reported its first negative-growth quarter since 2003 last month as iPhone, iPad, and Mac sales all declined compared to the year-ago period, and new data shows that notebook sales unsurprisingly fared no better when broken out. 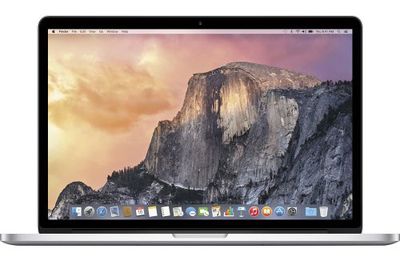 Apple's notebook market share dropped to an estimated 7.1-percent in the first quarter, down from 8.8-percent in the previous March quarter, as Windows-based PC vendors and the overall notebook industry continue to suffer from slowing sales.

In the first quarter, Apple did not have any new MacBook products ready for the market, nor did it lower MacBook prices to generate sales. Apple’s Wintel-based competitors, on the other hand, benefitted from Windows 10 and the steady supply of Intel’s Skylake CPUs. They were able to have numerous new products ready to promote and ship. As a result, MacBook shipments suffered a massive quarterly decline of 40.4% in the first quarter and Apple retreated to the sixth place in the ranking.

Many prospective buyers are also hoping for a redesigned MacBook Pro featuring faster Skylake processors and Thunderbolt 3 with USB-C, which could be announced at WWDC next month. Apple released a Skylake-based 12-inch MacBook in April and started shipping the 13-inch MacBook Air with 8GB of RAM as standard.

Apple officially reported Mac sales of 4.03 million during the past quarter, including the iMac, Mac mini, and Mac Pro alongside notebooks.

EDIT - and before - but but Apple waits on Intel! - there are insane amount of things they could have done years ago - much better facetime cameras, drop the pathetic HDDs and switch to SSDs-only, drop non-retina displays, reduce display bezels, release a decent ergonomic mouse?
How about Touch-ID for the Mac? How about Thunderbolt displays that are not 5 years old with USB 2, crappy speakers, reflective and so on?

As it stands right now - Apple offers stale products with outdated internals, at an unbelievable (exorbitant) price. That is something only Apple can do.
Score: 90 Votes (Like | Disagree)

smacrumon
Or, customers aren't upgrading or buying new MacBooks because their retail price point is way off the mark, incredibly too expensive.
Many "prospective buyers" wouldn't know exactly what was a "redesigned MacBook Pro" or a "Skylake processor", "Thunderbolt 3" or even "USB-C".
The price points are completely wrong.
Score: 68 Votes (Like | Disagree)

AndrewClarke
When Apple doesn't provide a MacBook Pro, Mac Mini, or Mac Pro worth buying, I'm sure it isn't a surprise to them that we're not buying them.

You'd have to be desperate to buy something from most of Apple's computer lineup right now. My 2011 MacBook Pro is limping along but I'll just keep reformatting/restoring rather than buy what they're selling at the moment.

Give me something I actually want to buy, Apple.
Score: 50 Votes (Like | Disagree)

Stella
$3000CA for the high end Macbook Pro 2015 - a total rip off. Looking at what you get for "PC" laptop at the same price range is an embarrassment for Apple!

Apple had better increase value for money in the next model...

Sadly, Apple are losing the edge with their computer range.. slimmer and eye candy hardware just doesn't cut it. There needs to be value for money. I'm not seeing it with the existing range.
Score: 46 Votes (Like | Disagree)

puma1552
Apple doesn't care about computers. They used to do major refreshes every 8 months with speed bumps every 4 months, now you're lucky to get one half-assed update a year.

Spare me the spiel about being chained to Intel's cycles, they could certainly update many other parts of the machine on a regular basis.
Score: 46 Votes (Like | Disagree)
Read All Comments