Apple has begun notifying recipients of scholarships to the 2016 Worldwide Developers Conference, according to several developers on social media and MacRumors readers. Apple is awarding 350 scholarships to students and members of participating STEM organizations and is also offering 125 scholarships to developers with financial limitations. 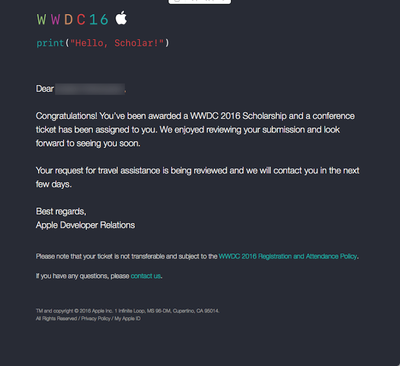 Winners of the scholarship receive a free ticket to WWDC 2016 and, in addition, may receive travel assistance to the event. To be eligible, developers had to be 13 years or older, a full or part-time student or a member / alumni of a STEM organization. Developers had to submit an app they worked on that demonstrated "creative use of Apple technologies and runs on an Apple platform."

WWDC 2016 will take place from June 13 to June 17 at Moscone West in San Francisco, California. However, the kickoff keynote event will be held at the Bill Graham Civic Auditorium, a venue that is able to accommodate more guests. Apple is expected to announce new versions of iOS, tvOS, watchOS and OS X, which may get renamed macOS.

For the rest of the week, developers and scholarship winners will be able to meet with more than 1,500 Apple engineers and attend more than 100 technical sessions and hands-on labs. Developers who do not have a ticket to WWDC will be able to watch live streamed WWDC sessions that will cover a range of topics and devices.

I went to the WWDC 10 years ago. It turned out to be the last year that the WWDC was about computers. I'm glad I went. I miss it.
Score: 5 Votes (Like | Disagree)

The ticket is the cheap part. The hotel at $200+ a night (for something decent) and airfare (if you aren't local) will make that $1600 ticket look like nothing.

Yeah, I could imagine it gets quite pricey; I interviewed at Apple about a year and a half ago, and the total cost they covered for my trip out to Cupertino for a two-day stay was about $1500 (airfare + hotel + car + paid meals). Really great experience. Anyway, those that are going, have fun!
Score: 1 Votes (Like | Disagree)

Mr. Dee
Well, I am not a developer, so its not a big deal for me, but I want to visit the new campus next year.
Score: 1 Votes (Like | Disagree)

I don't know why but I don't fancy this print('geeky style') advertising for this WWDC.
Either way congrats to the winners.

Well, are you a developer? If not, then that's probably why. This is what we developers see for 8+ hours a day, every day. It's kind of fun to see it in a playful manner for a change.
[doublepost=1462877843][/doublepost]

It's going to be probably most boring of all keynotes.

Whew! Good thing there is more to WWDC than a 2 hour keynote!
Score: 1 Votes (Like | Disagree)

John Mcgregor
It's going to be probably most boring of all keynotes.
Score: 1 Votes (Like | Disagree)

The ticket is the cheap part. The hotel at $200+ a night (for something decent) and airfare (if you aren't local) will make that $1600 ticket look like nothing.
Score: 1 Votes (Like | Disagree)
Read All Comments