Streaming company Netflix today introduced a new set of "cellular data controls" that will give its customers control over the quality of video streaming on cellular networks so as to avoid overcharge fees with data-capped plans. The launch follows an admission of throttling video by Netflix earlier in March, when the company also confirmed the data saver feature would debut in May.

According to Netflix, the default control setting will let users stream approximately 3 hours of TV and movies per gigabyte of data, which it determined as the sweet spot setting that "balances good video quality with lower data usage to help avoid exceeding data caps and incurring overage fees." Of course, since the whole point is personal customization, the controls let users on higher data plans up the streaming quality at their will, and vice versa. 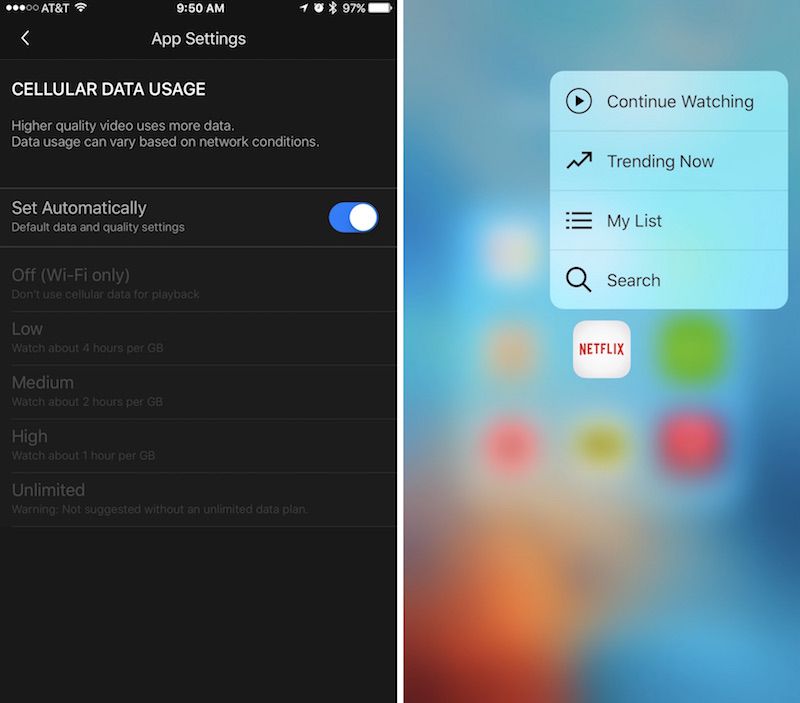 The cellular data controls can be found in App Settings, with the various customizable controls available once you toggle off "Set Automatically." From there users can choose Low (4 hours per GB), Medium (2 hours per GB), High (1 hour per GB), or Unlimited options for streaming video in the app. An alternative also exists to shut off cellular data playback completely -- and only use Wi-Fi -- within the menu.

In addition to the cellular controls, the 8.4.0 update to Netflix on the App Store also brings 3D Touch support for Quick Actions right from the Home screen, VoiceOver improvements to navigation, and various bug fixes. Those who have yet to do so can download Netflix from the App Store for free. [Direct Link]

joueboy
How about offline viewing like Amazon. That saves a lot of data for your customers.
Rating: 6 Votes

KALLT
Weird that something like this wasn’t there from the beginning. Surely, it must have occurred to someone before that limiting or adjusting mobile data usage of a data-heavy app is something a lot of people care about?


You seem to be well-informed. o_O
Rating: 4 Votes

2457282
Seem like a smart move. I don't watch Netflix on my cell phone and my iPad is wifi only, so about the only time this will apply is when traveling and not having access to wifi. That happens when Hotels charge extra for wifi, so I am happy to know that this option is there.
Rating: 2 Votes

Weird that something like this wasn’t there from the beginning. Surely, it must have occurred to someone before that limiting or adjusting mobile data usage of a data-heavy app is something a lot of people care about?

You seem to be well-informed. o_O

Just repeating what I have heard.;)
Rating: 2 Votes

So do the quality settings relate to Wi-Fi at all?

Or as long as you're connected to Wi-Fi, and 'HD' is set, you're getting the best you can? (iPad)


this is not a matter of getting "the best you can", though to answer your question that's what being hooked up to wifi means. What this setting will allow you to do is hard-set the quality, because as it is now LTE and 3g are all capable of "wifi" speeds, and thus able to give you the very best quality; so long as the buffer can keep up. But do you really "want" to watch a 1080p movie on a device where 480 still looks fine when that means you are only going to be able to watch 1/2 a movie or show because you ran up against your data limit?
[doublepost=1462465690][/doublepost]


1000k THIS. It's so frustrating to have a carrier [verizon] who touts the best and fastest connections, only to be sitting at 5 bars of LTE and still have a video (netflix, hulu, youtube) sit at "buffering" every 3 seconds.

The latest verizon commercials crack me up, Rickey Gervais telling us that Verizon works just fine outsize of Kansas but I can tell you there's a whole quadrant of Northern CA where it doesn't.
Rating: 1 Votes

I'm considering a switch at some point this year from Verizon. Do you have a 6s or SE? Both of those devices have LTE extended, which is supposed to provide better coverage. My wife used to travel a lot in the country to do training with parents of autistic children, so Verizon was worth the extra bills. Now she runs her own daycare so we don't really need it. Data stash sounds fantastic. Can you turn on that video throttling per device? I feel like 480p would be fine for the iPhone, but if I add an iPad to my line, I'd be really annoyed by 480p. Not that I would use it all the time, but 720p would be a lot better to deal with on a larger screen.


No I just have the 6, but yeah the 6S would help. Yeah, throttling is per device (at least on our phones, I'm not sure if iPads work differently). You can turn it on and off relatively easily (through a number and I think in the T-Mo app). I'm not sure how much it costs to add the iPad, but personally I wouldn't. It's so easy to use your iPhone as a hotspot if you ever need non-wifi data to your iPad, Mac, Apple TV... And if you want to stream video, just turn it off. I'll probably be maintaining close to 20gb of data stash (the max) most of the time (in addition to my 6GB of data), so I don't think I'll ever worry about running out.
Rating: 1 Votes

Mad Mac Maniac
Cool. T-Mo is already doing this for me (and giving me unlimited streaming for it at that!)
Rating: 1 Votes
[ Read All Comments ]