With the launch of iOS 9.3, Apple introduced a new Apple Music API, which is today being promoted through Apple's Affiliate Program Newsletter. The Apple Music API gives developers the resources to expand Apple Music functionality in their apps, through the following features:

The iOS 9.3 Apple Music API has already been built into several music-related apps, such as Shazam. The API is what enables Shazam and other music apps to do things like add songs to Apple Music playlists from directly within the Shazam app. 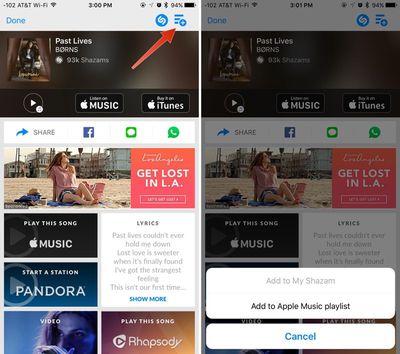 As noted by MacStories, Apple has also launched a new Apple Music Best Practices webpage for app developers and expanded App Store Review Guidelines for Apple Music. According to Apple's guidelines, apps using the Apple Music API are subject to the following restrictions:

Would like to see them make a simple MP3 player that doesn't require a degree to use.

There current one is god awful. I don't, for the life of me, understand why they think it's close to ok. It's unintuitive, the UI sucks...half my music is now in the cloud for some reason and not natively on my phone (can't say if that's the app's fault). When advancing through a song it is very annoying to accidentally click the share button. It's soooo bad.
Score: 8 Votes (Like | Disagree)

Would like to see them make a simple MP3 player that doesn't require a degree to use.

I'm not trying to be a smartass, but am I missing something? Sure, there is room for improvement, but I use the music app daily and never had to "figure anything out". It's pretty cut and dry. Hell, I can now not even touch my phone and just say, "Hey Siri, play Deftones" from across the room.
Score: 6 Votes (Like | Disagree)

I'm not trying to be a smartass, but am I missing something? Sure, there is room for improvement, but I use the music app daily and never had to "figure anything out". It's pretty cut and dry. Hell, I can now not even touch my phone and just say, "Hey Siri, play Deftones" from across the room.

Copying songs, playing songs from from my library without all the store integration, etc. Frankly, it's very convoluted and forces you to use a bunch of functions that are overkill for a basic player. Glad it's worked out so well for you but read through the boards here, on Apple and elsewhere, I'm not the only one with this complaint. I downloaded a simple player for $5 and it works like a charm without having to jump through a bunch of unnecessary hoops. IMO they've made this app useless for the average user.
Score: 4 Votes (Like | Disagree)

They need to add a notification system and add collaborative playlists

Any improvements with Connect?

I used these APIs inside my app and will release it next week. It's called SoundShare. It's a Social Music Network that allows every single Apple Music user to see and play what their friends are listening to, like their songs, add a comment, mention another friend, and of course, the most important feature, build collaborative playlists. But it won't stop there. SoundShare will also allow cross platform collaboration and interaction. Meaning that an Apple Music user can collaborate on a playlist with a Spotify user and a Deezer user. It's incredibly powerful.

It's so deeply integrated that you can simply replace the Apple Music app with SoundShare. You'll still have access to all your playlists, will be able to add songs to them, save songs to your library, plus all the benefits I described above.

Below are the two teasers for the app:

tdale
They need to make the Music app work on a 6 Plus. No landscape. Miserable fail.
Score: 3 Votes (Like | Disagree)

ericgtr12
Would like to see them make a simple MP3 player that doesn't require a degree to use.
Score: 3 Votes (Like | Disagree)
Read All Comments