The company's first mass-market electric car was driven onto a foggy stage in an extravagant unveiling, where Musk revealed that the Tesla Model 3 will seat five, and be able to cover at least 215 miles on one charge. 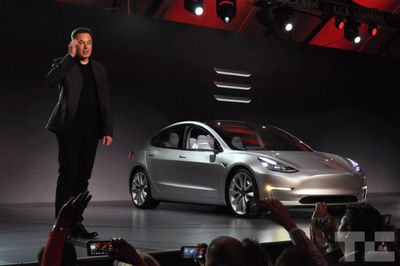 Tesla CEO Elon Musk unveils the Model 3 in Los Angeles (Image: TechCrunch)
Musk said the standard Model 3 would be capable of zero to 60 miles per hour in less than 6 seconds, and will cost $35,000, which is half that of the company's current flagship cars, the Model S sedan and Model X crossover.

Despite photo restrictions at the unveiling, TechCrunch was able to get some good shots of a red Model 3, which looks like a more sporty version of the company's Model S.

The Model 3 will also feature Autopilot for assisted driving and be future-proof for self-driving road use. Shipping begins late 2017, by which time Tesla says it will have doubled the number of charging stations worldwide and will include charging for free.

The Model 3 is Tesla's attempt to bring electric cars to the mass market and is considered critical to the company's future success.

Interest has been strong, with yesterday's reservations for the Model 3 at Tesla stores and galleries – some of which are located directly adjacent to Apple retail stores – arguably eclipsing the launch of the iPhone SE. Musk later boasted on stage that the company had already secured 115,000 reservations before the car had even been revealed.

The full selection of photos of the red Model 3 is available on the TechCrunch site. The video below, posted by iVenyaWay, shows off Tesla's new car in silver. A matte black option briefly features towards the end.


Apple is widely believed to be working on its own electric road vehicle, commonly referred to as the Apple Car, which Musk has called an "open secret" in the industry. According to Musk, the hundreds of engineers Apple has taken on make it clear there's an electric car in the works.

Apple and Tesla have hired each other's employees over the last couple of years, with Musk saying that Apple has hired away "very few people" from the car company despite offering $250,000 signing bonuses and 60 percent salary increases to its employees. Tesla meanwhile has hired nearly 150 Apple employees.

You can watch the full unveiling of the Tesla Model 3.

east85
Not sold on the complete removal of digital instrument panels directly in front of the driver. Seems like it would be annoying glancing over at the giant bright screen for basic speed indication. An optional headsup windshield display would be a much nicer solution imo, even if offered as an optional redundancy in functionality.
Score: 25 Votes (Like | Disagree)

djcerla
Yeah it eclisped the SE launch! And it's way thicker!
Score: 21 Votes (Like | Disagree)

NachoGrande
Looks beautiful. but the no grill thing is a bit much. They should have put one on. I can only imagine what that will look like after a year on the road.
Score: 18 Votes (Like | Disagree)

Looks beautiful. but the no grill thing is a bit much. They should have put one on. I can only imagine what that will look like after a year on the road.

They should make a front grill and blow air to front trunk? There is no big engine in front u know.
Score: 17 Votes (Like | Disagree)

soupcan
If you've ever driven one of the older Mini Cooper models you know what a pain in the ass it is to not have basic information such as speed and range right in front of you. Constantly having to look to the side for the very basics is a bad idea.