Apple's new 9.7-inch iPad Pro, widely expected to be announced at the company's "Let Us Loop You In" media event on Monday, will start at $599 and have 32GB and 128GB storage options, according to 9to5Mac.

The base $599 price will apply to the 32GB model with Wi-Fi only, while 128GB and LTE versions will be sold at higher price points. The older iPad Air 2 will reportedly remain in Apple's tablet lineup, likely for $499. 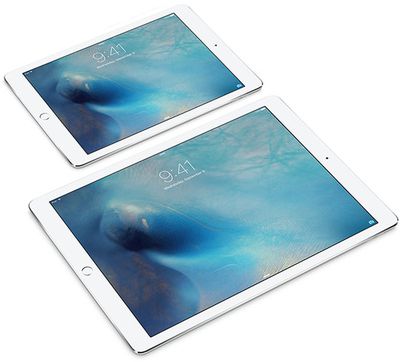 Previous 9.7-inch iPads have had a $499 starting price, meaning the smaller iPad Pro could be Apple's most expensive tablet ever in its size class. However, 32GB base storage would be higher than 16GB for the base iPad Air 2.

The much-rumored 9.7-inch iPad Pro is expected to have many new features compared to the iPad Air lineup, possibly including a Smart Connector, faster A9X chip with up to 4GB of RAM, four speakers, and 12-megapixel rear camera.

MacRumors will be providing live blog and Twitter coverage (@MacRumorsLive) of Apple's media event, which commences on Monday at 10:00 a.m. Pacific. A new 4-inch iPhone SE and Apple Watch updates are also expected.

No doubt Apple will be increasing its average profit per unit with this move.

Let's look at the main changes:

* The A9X is nice, but that's what a non-Pro iPad would have had either way if they had kept their previous pattern. (e.g. if Apple had gone with a $499 iPad Air 3, it still would have had an A9X). In fact, their flagship 9.7" iPad's chip is kind of weaker than before (relative to time), considering the Air 1 and Air 2 were released with a brand new architecture, whereas this iPad Pro will use a 6-month old architecture that will probably be surpassed by the iPhone 7's A10 in another 6 months.
* Having 4 speakers is nice, but that doesn't justify a price increase. Small speakers like those are dirt cheap.
* An increase to 32GB for the base model is nice, but again, doesn't justify a price increase. 16GB has been the norm ever since the first iPad was released in 2010. 32GB of NAND storage in 2016 probably isn't more expensive than 16GB in 2010. iPhones have seen their base capacity increase over the years (4 to 8 to 16) without a price increase. Same for iPods and Macs.

All those don't justify the Pro branding and the $100 extra. It's stuff you should expect from an Air 2 -> Air 3 update (which is an expectional 2-year cycle, so it's normal to have slightly higher expectations too).

So really, what justifies the Pro branding and associated $100 increase? 2 other main changes:

The thing is, to actually use those capabilities, you need to buy high-margin accessories sold separately. So Apple was going to increase their average profit per iPad sold either way, regardless of a price increase for the iPad itself.

The iPad also had various reductions in component costs over time (e.g. newer iPads having smaller batteries and enclosures than older ones) that never resulted in any price decrease.

Apple is getting really agressive about increasing its profits. Between this, the price of the 12.6" iPad Pro and its accessories, and the price of the new Magic Mouse and Magic Trackpad, I'm getting worried a little.
Score: 90 Votes (Like | Disagree)

PTLove
Im starting to get annoyed with Apple. I mean, I get these decisions, but its starting to really rub me as arrogant.
Score: 55 Votes (Like | Disagree)

oopsroger
Typical Tim Cook Apple:
1. run out of ideas (Just take a look at iOS and OSX)
2. go after new product category prematurely (Watch)
3. resizing and renaming existing ones
4. having done all above, have the audacity to increase price.
Score: 25 Votes (Like | Disagree)