Following an announcement in January, ExxonMobil today officially launched Apple Pay support within its Speedpass+ iOS app, letting customers pay for gas or car washes directly from their iPhone (via CNET). Although most of ExxonMobil's stations come equipped with an RFID station for mobile payments, the company decided to focus on software within the app to further streamline the transaction process.

"Anything that involves the pump from a hardware point of view takes years to deploy and is extremely expensive," Bryant Russell, Americas program manager for mobile payment and loyalty at ExxonMobil, said during a demo of the app at the San Mateo gas station. 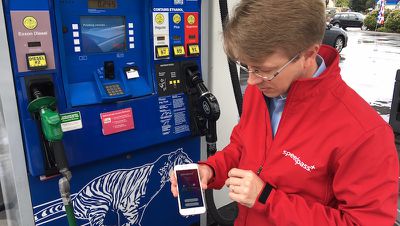 The Speedpass+ app will use GPS to check the exact location a user is at, ask which pump they are using, and confirm the purchase with Touch ID. Locations with spotty GPS will be guided through a QR code-scanning step or manual search process within the app.

Once payment in the app is finished, users have "about 45 seconds" to start pumping gas, or Speedpass+ will time out and require users to start over from the beginning. Similar to Apple's own Wallet app, Speedpass+ will track the purchase history of every transaction at ExxonMobil locations.


Last year, Chevron launched a pilot program for Apple Pay -- using NFC terminals -- in a focused location within the Bay Area. ExxonMobil's widespread introduction of Apple Pay today is the first big rollout for the mobile payment service by a gas company to date, despite its software-focused rollout. Next, the company plans to begin introducing Apple Pay into its convenience stores along with linking its Plenti loyalty program to the service.

The Speedpass+ app can be downloaded from the App Store for free. [Direct Link]

Implement NFC at the pump for Apple Pay. When I can just tap my Apple Watch to the pump it will be an immediate win.
Score: 28 Votes (Like | Disagree)

Apple Pay is not going nowhere

so Apple Pay is going somewhere?
Score: 20 Votes (Like | Disagree)

multipasser
Wait what? So now you HAVE to use your phone while using a tankstation? Before it was not allowed because of firehazards.
Score: 13 Votes (Like | Disagree)

This seems less convenient than just swiping a card. DOA.

Implement NFC at the pump for Apple Pay. When I can just tap my Apple Watch to the pump it will be an immediate win.

To be honest, I'm okay with this implementation. Gas pumps are the last place I want to use a physical card at..
Score: 8 Votes (Like | Disagree)

Trik
This seems misleading. We need different names for NFC Apple Pay and the Apple Pay that is implemented in 3rd party apps. The level of effort for one versus the other is significant.
Score: 7 Votes (Like | Disagree)

Weaselboy
I just used the app with Apple Pay a few minutes ago at a Mobile station and it went smoothly.

When you download the Speedpass+ app and launch it, you are prompted to make an account. You can use any name and email you want to make the account. No email verification is sent. By default Apple Pay is listed as a payment method. You can add other credit cards to the app if you like.

So I rolled into the gas station and opened the app. In about two seconds it used GPS to figure out what station I was in and a graphic came up asking what pump number I wanted. I selected my pump number then the familiar Apple Pay fingerprint logo came up. On that same Speedpass+ screen are a couple toggles for car wash, email receipt, and print receipt. I configured those toggles like I wanted then did the touchID. At that point I just put my phone in my pocket and watched the screen on the pump. It immediately came up with an "Authorizing..." message just like when you swipe your CC and enter the zip code. About three seconds later it authorized and I filled my tank. About three seconds after I shut off the pump my iPhone vibrated, so I checked the Speedpass+ app and noticed it showed the completed transaction.

In an email alert from my bank I noticed they sent a one dollar charge as soon as a I authorized with touchID, then after I finished pumping gas the one dollar charge disappeared and the full amount charge appeared as a CC transaction.

Now that I know how this works and I have the options toggled like I want, I think from now on it is about as fast as just swiping my CC and having to enter your zip code at the pump. Plus using Apple Pay like this it protects my CC from being intercepted by the bad guys.

To those concerned about the Speedpass+ app tracking your spending, I suppose I understand the concern, but personally I could care less if Mobil knows where and when I bought gas. They already knew from my previous CC transactions anyway. I suspect they are using this SpeedPass+ app/system because it allows them to integrate Apple Pay into their existing hardware without having to add Apple Pay compatible NFC hardware into millions of gas pumps.
Score: 6 Votes (Like | Disagree)
Read All Comments