Apple CEO Tim Cook today spoke with ABC News anchor David Muir, explaining Apple's decision to object to the court order that would require it to help the FBI break into the iPhone owned by Syed Farook, one of the shooters in the December attack in San Bernardino, California.

In the interview, Cook reiterated much of what he wrote in the open letter where he announced Apple's plans to stand against the government and oppose the order to create a backdoor into iOS devices. 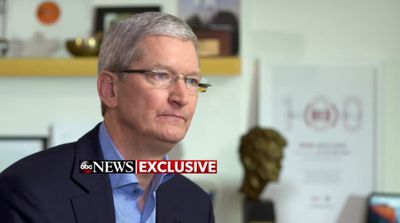 According to Cook, the software the FBI wants to use to brute force the passcode on Farook's iPhone would be "the equivalent of cancer" that has the potential to put hundreds of millions of Apple's customers at risk.

The only way to get information -- at least currently, the only way we know -- would be to write a piece of software that we view as sort of the software equivalent of cancer. We think it's bad news to write. We would never write it. We have never written it. And that is what is at stake here.

He went on to say that the fulfilling the FBI's request could set a precedent that eventually leads to weaker smartphone encryption. "If a court can ask us to write this piece of software, think about what else they could ask us to write," said Cook. "I don't know where this stops. But I do know this is not what should be happening in this country."

Cook says Apple has cooperated fully with the FBI, giving all of the information that it could provide. He said opposing the government "doesn't feel right" and that it's a "very uncomfortable position." He also expressed deep sympathy for the families impacted by the attack and said he wished the FBI had contacted Apple before changing the Apple ID password on the phone, making it impossible to get an additional iCloud backup. According to Cook, Apple first heard about the FBI's initial filing from the press.

Cook explained that Apple is not just protecting the data on one phone, it's protecting the data on the devices of all of its customers. He says if Apple knew a way to get the information on the phone that would not expose millions of customers to issues, the company would do it. "This is about the future," he said. "As people understand what is at stake here, an increasing number support us."

Brookzy
Could this be Apple's finest hour?

Practicing what they have preached for years, putting their money where their mouth is, risking a lot of bad publicity.

It would have been so easy to back down at the start.

I remember the criticism Cook and Apple got for being outspoken on social issues, especially around discrimination and equal marriage. The argument being a company should keep out of governance, and just do their thing. And such a short time later we see how vital outspoken companies now are: defending the public against government encroachment on civil liberties and triggering a global debate that will probably wind up in the supreme court.

Whatever your opinion, Apple and Cook's steadfast commitment has to be admired.
Score: 70 Votes (Like | Disagree)

dannyyankou
My grandma had cancer and I'm not offended. He's absolutely right, and it gets people's attention.
Score: 51 Votes (Like | Disagree)

I have Stage IV Pancreatic cancer. Doubt it.

I think a more appropriate analogy would be something that can spread through contact/exposure. Maybe you are too sensitive to the mention of AIDS/HIV.

farewelwilliams
Jony Ive is the hardware equivalent of cancer...making the battery thinner and everything.
Score: 33 Votes (Like | Disagree)

I have Stage IV Pancreatic cancer. Doubt it.

I think a more appropriate analogy would be something that can spread through contact/exposure. Maybe you are too sensitive to the mention of AIDS/HIV.
Score: 29 Votes (Like | Disagree)

Rogifan
I don't know how anyone can watch this interview and think this is all marketing. Cook said Apple will take this to the Supreme Court if necessary. It's pretty sad that others in the tech community have been so weak in their support of Apple so far.
Score: 26 Votes (Like | Disagree)
Read All Comments