Privacy campaigners held organized rallies across the US yesterday to protest the FBI's demands that Apple unlock the iPhone at the center of its San Bernardino shooter investigation.

Following on from limited protests in California last week, rallies extended from Albuquerque to Washington DC to support Apple's insistence that complying with the bureau's demands risked compromising the security of millions of users' data. 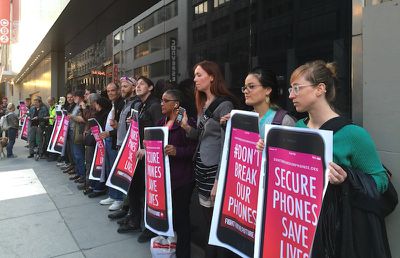 Protestors rally outside an Apple Store (Image: Cult of Mac)
Large crowds are reported to have gathered in front of Apple Stores in Boston, Portland, Reno, Seattle and Los Angeles, with protestors wearing T-shirts and brandishing signs with slogans such as "Don't break our phones". One rally at San Francisco's downtown store – the site of last week's protests – drew around 40 protestors and about 20 members of the press, beginning late afternoon and continuing into the evening.

"We're concerned that if Apple undermines its security in response to the FBI's request it will set a very dangerous precedent that could be used in any number of cases going forward, both by the US government and by international governments, including authoritarian regimes that might seek to access our information," Rainey Reitman of the Electronic Frontier Foundation told Cult of Mac.

"We're also worried that that key, once it's created, could be a honeypot for hackers that might want to seek access to information or could be misused in many diverse ways. We don't think that it's appropriate that the government order a tech company to undermine its own security in any way."

Protestors support Apple at The Grove in Los Angeles (Image: John McCoy)
The extended protests come a week after a U.S. federal judge ordered Apple to assist the FBI with unlocking an iPhone belonging to suspected San Bernardino shooter Syed Rizwan Farook. Apple moved swiftly to oppose the court order in an open letter to customers. The company has until February 26 to file its legal response.

Meanwhile, the U.S. Department of Justice is reportedly pursuing additional court orders that would force Apple to help federal investigators extract data from twelve other encrypted iPhones that may contain crime-related evidence.

The twelve cases are apparently similar to the San Bernardino case in that prosecutors have sought to use the 18th-century All Writs Act to force Apple to comply, but none are related to terrorism charges and most involve older versions of iOS software.

Apple is a Dishonest company, Why Apple blocks Samsung phone sales in the court case. Because Samsung is only the brand, that can fu.. apple. This happens only in the USA. This is a fascism

Next time sober up before posting.
Score: 24 Votes (Like | Disagree)

I know people are getting sick of hearing this but... I wonder how Jobs would have dealt with this , would have been interesting

Steve refused to put plates on his car. Ever. He used a loophole in California law that required registration "within 6 months" to drive his car without a plate, trading it in for a new car every 5.9 months. His stated reason was that he didn't want his personal info available via plate request, and that he preferred to remain anonymous. But he was repeatedly photographed in his plateless Benz and even waved at people from time to time during photos.

Steve, though he was a registered Democrat and even sat Al Gore on the Apple Board, never publicly lobbied the government during his reign, not personally or via Apple. In fact, Apple's lobbying budget was so negligible it wasn't worth publishing during some years.

When he and other tech leaders had a "historic summit meeting" with Obama, he was asked to come to DC. He responded that he was too busy, and Obama needed to come to San Francisco. Obama agreed to. The Secret Service wanted control of the seating, Jobs said no. Obama caved and Jobs controlled who sat with whom. I think Jobs even controlled the food offerings. I doubt he would have showed up if the administration gave him any trouble about his demands. Ultimately, Steve only gave Obama about two hours time and then said he had to get back to work.

Go watch the videos of Steve's various meetings with the Cupertino city "planners" for a laugh. Despite being very sick, he was very resolute and almost scary in the way he handled them; at one point he threatened to take the entire company out of Cupertino because of a very stupid question from one of the council members. There was no question that he was serious. Even in his advanced illness he broke them.


I think its safe to say that he would have rather quickly put them in their place.

In fact, I think they wouldn't have ever dared ask for the data.
Score: 13 Votes (Like | Disagree)

If our criminal justice system can't possibly do its job without Apple doing it for them, we've got much bigger problems. How did law enforcement manage to do it before there were cellphones? How did the iPhone bring our once mighty government down to its knees. The way they're begging really makes our nation look pathetic.

The majority of law-abiding, tax-paying citizens should not have their Constitutional freedoms sacrificed because of a small minority of criminals that are capable of somehow outsmarting our law enforcement.

I don't know about you, but as an American I value the freedoms I still have left. I'm not in favor of the government taking more than is necessary, and what they're asking for is a direct attack on our Constitutional right to privacy.
Score: 11 Votes (Like | Disagree)

displayblock
I'm much more likely to get hit by a car and killed on my way to work than ever come close to a terrorist attack. Yet the terrorists somehow keep on taking more and more of our freedom away. I don't think we should keep giving them what they want.
Score: 11 Votes (Like | Disagree)

tomaustin44
'Don't break our phones' is a pretty unintelligent tagline... It completely misses the main privacy issues surrounding the debate. I'm all for what they're doing but do I love my phone to print off an enormous poster and beg the government not to 'break it'? Seems a bit desperate.
Score: 8 Votes (Like | Disagree)

Pretty cut and dried here. Two issues-withholding evidence and contempt. Tim Cook should already be in jail. Like it or not, disagree or not, laws are laws and he has broken them.

Apple is not withholding any evidence because they are not holding the phone.

And there's no contempt because there no breach of an order. That matter is still pending trial.

Btw just a side note you do know that your comment is defamatory right?
Score: 7 Votes (Like | Disagree)
Read All Comments