In January of 2015, WayTools announced the TextBlade, a compact, collapsible keyboard that sparked a lot of interest with its unique multilayered layout that replaces a full keyboard with eight large smart keys.

Refinements, production issues, and other hiccups have long delayed the release of the TextBlade, which was originally scheduled to ship out to pre-order customers in the early months of 2015. After a long development period that has frustrated many early customers, WayTools is finally ready to begin shipping the TextBlade, albeit with a caveat - a limited number of test customers will receive the first TextBlades that are going out, to provide final feedback before a full rollout. 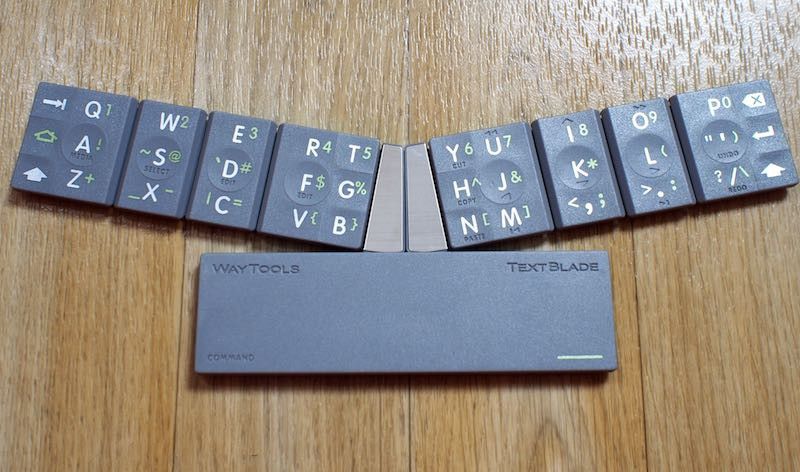 Starting late next week, pre-order customers who signed up for the TextBlade Test Release Group (TREG) in January and were accepted will start receiving TextBlade shipments. TextBlades will go out to testers on a rolling basis with shipments happening every few days. The Test Release Group was announced to customers through their pre-order page and while WayTools can't accommodate everyone who applied, a couple hundred customers will be participating and will be receiving TextBlades. 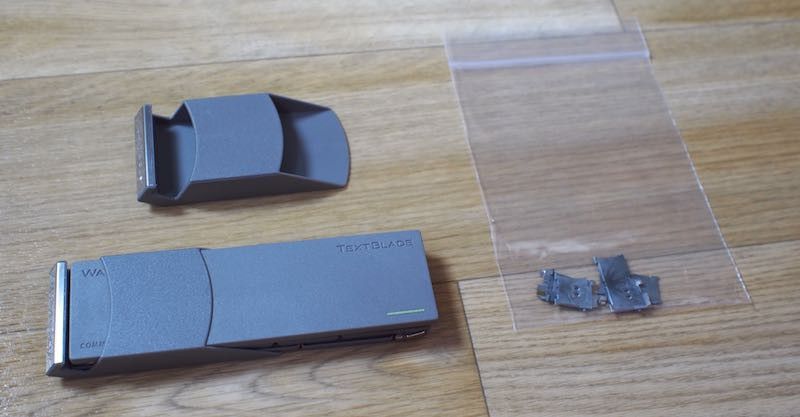 Mark Knighton, WayTools' CEO, says the company is using the Test Release Group to iron out final bugs ahead of the full TextBlade release.

We're not expecting huge problems. We think it will be firmware and we think it will be corner cases -- unusual cases. The basics are operating fine. What we're looking for is what happens when you press a weird button combination, or your unit gets stuck and doesn't respond. That's a software failure. It's rare, and usually some weird corner case. We've killed off most of those, but some of that may come up. We're looking for the number of incidents where someone has to reset [the TextBlade] to be miniscule.

Customers who are not part of the testing group will need to wait longer to receive their TextBlades, and the wait is dependent on the outcome of the testing. Should all go well, a general release could happen towards the end of March, but the wait could be several weeks longer. "TREG tests will be complete when users give us the thumbs up," said Knighton. "Based on what we find together, that may take as little as a week, or up to several weeks. When the TREG users are happy, we'll start the broader release."

To give users who are awaiting their own TextBlades a first look at a TextBlade in the wild, WayTools sent me one under the same confidentiality agreement as the testing group. I'll share some unboxing photos and initial thoughts on the TextBlade below, but there are still a few details that will remain under wraps until the final release. 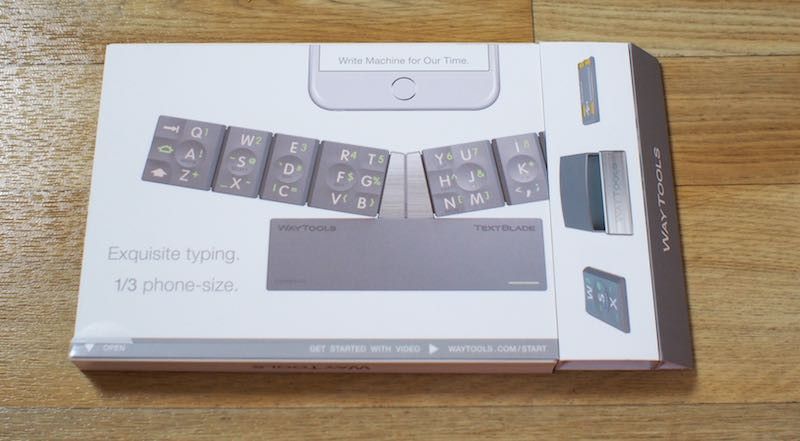 The TextBlade ships in minimal eco-friendly packaging. Mine arrived not in a box, but in a mailing envelope protected by a built-in frame and a sturdy product box, all of which WayTools says is biodegradable. The TextBlade is in its own box, and included was an accessory pack with an extra stand. 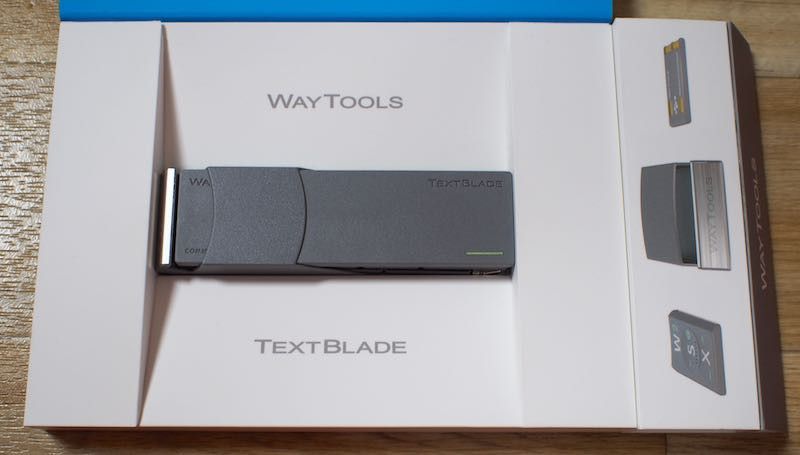 There are no manuals or other papers in the box because WayTools plans to direct users with questions to its website and app, but the lid (which won't be shown) includes a welcome message and details on the early adopter guarantee and gift. The box itself has minimal labeling, with just a picture of a folded TextBlade on the front, FCC and other regulatory labeling at the side, and a full TextBlade with an iPhone on the back. 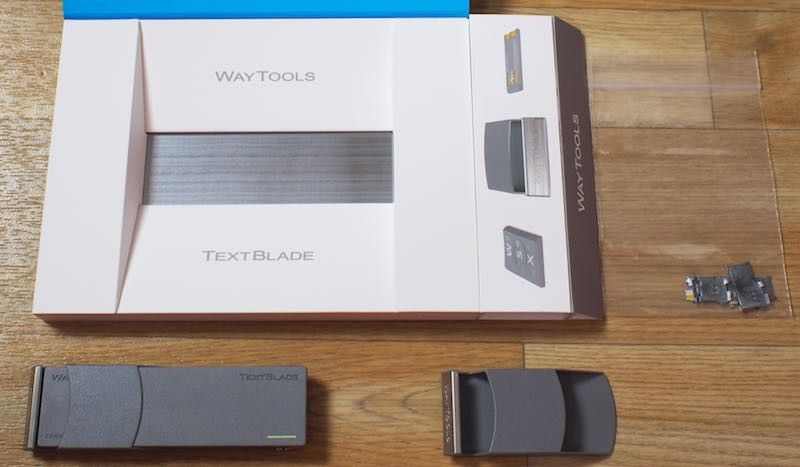 Inside the box, there's a stainless steel plate that a folded TextBlade rests on. The TextBlade is magnetic, so that plate makes sure the TextBlade doesn't move in shipping and it makes sure it's right at hand as soon as the box is opened up. The TextBlade also ships with extra butterflies for the keys. 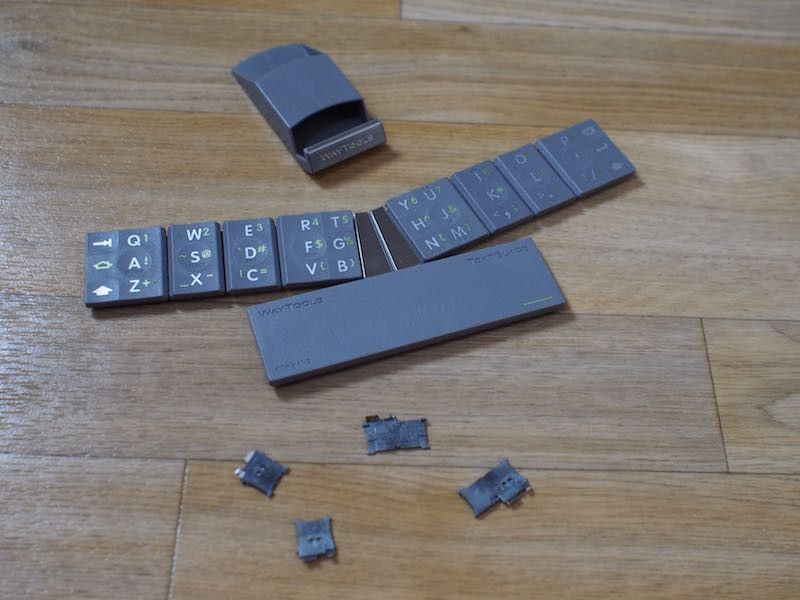 I received a TextBlade on Thursday morning, so I've had it on hand for about 24 hours. Many of you are already familiar with the TextBlade and its four components -- a stand for holding an iPhone or iPad, two blades with four keys each and a space bar that powers it all. Each of the keys is layered, so while there are only eight keys, you can type anything on the TextBlade you can type on a standard keyboard through a combination of key presses. If you want a more in-depth look at how the TextBlade works (and a look inside), make sure to check out the first hands-on post I did where I visited WayTools in Santa Monica. 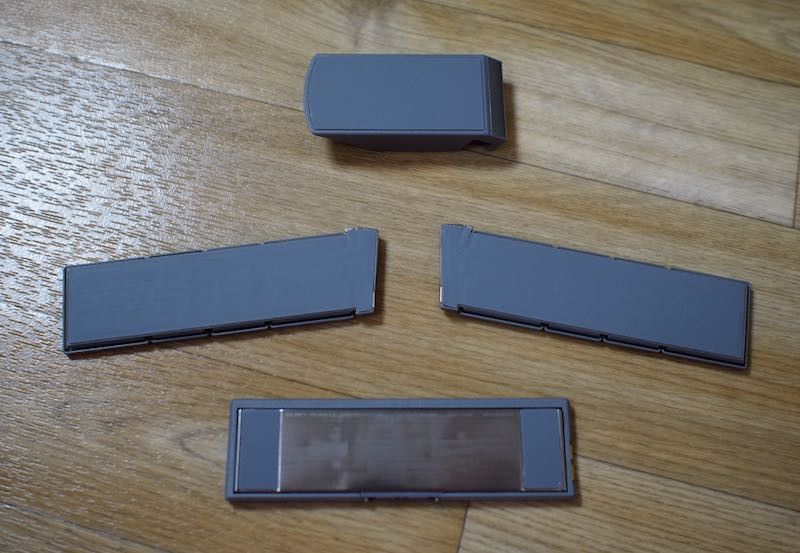 The underside of the TextBlade pieces

I'll be doing a full review of the TextBlade in a few weeks after I've spent a good amount of time with it and have been able to form a firm opinion on the usage experience, but I can say from a first look that it works, and it works well. I can't speak to what small firmware bugs may pop up, but in the hours that I've used it so far, my experience has been positive. Everything I've done has worked seamlessly, from setup to testing the app to typing, and I haven't run into any bugs even though I've got a pre-TREG unit with firmware that's about 10 days old. 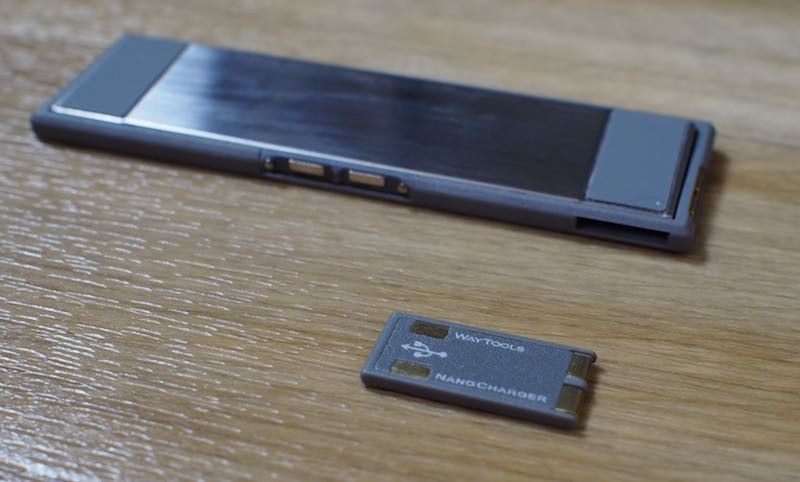 The SpaceBlade houses the TextBlade's charger, which pops out of the end when tapped and plugs into any USB port.

My unit looks like the first TextBlades I saw months ago, but as most know, there have been a lot of tweaks and refinements. Speaking to general feel, the keys are a bit softer than the keys of a Retina MacBook Pro or MacBook Air, but there's good amount of travel and I found them satisfying to press. The pieces of the TextBlade feel delicate but sturdy, and I'm still impressed with the functionality vs. the size. Folded up, it's pocketable. 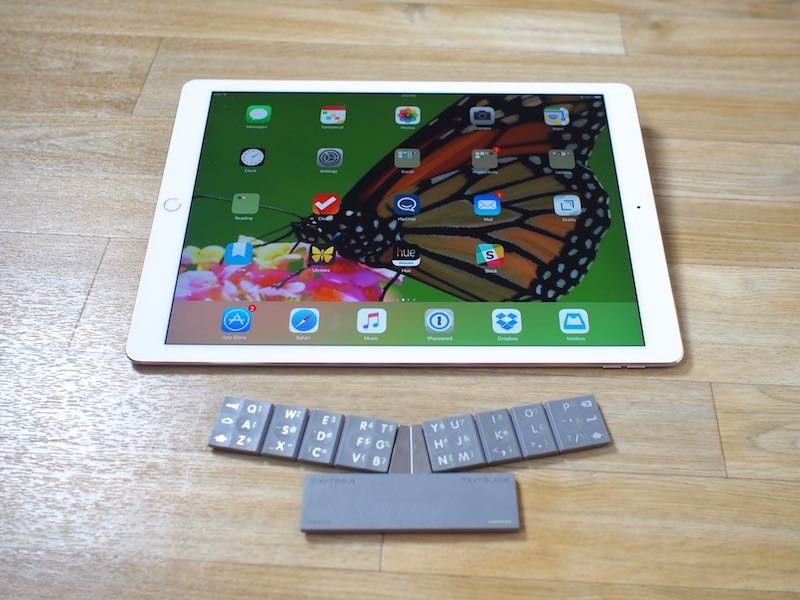 The TextBlade stand can't hold up the iPad Pro, but it does work to prop it up at a slight angle for typing.

I type thousands of words per day on a Retina MacBook Pro keyboard, so the TextBlade is a major adjustment for me. There's a definite learning curve here. I need to memorize new finger placement and the functions of the keys, and I suspect the time to really master the TextBlade is going to range into weeks and not days.

As far as early learning, the app has been helpful. The TextBlade can be entirely customized through the app, enabling or disabling functions, changing the boundaries of keys to match different typing styles, and remapping keys. There's also a mode that displays a virtual TextBlade on the screen that works as a visual guide to let me know what I'm going to get when I touch a specific key. 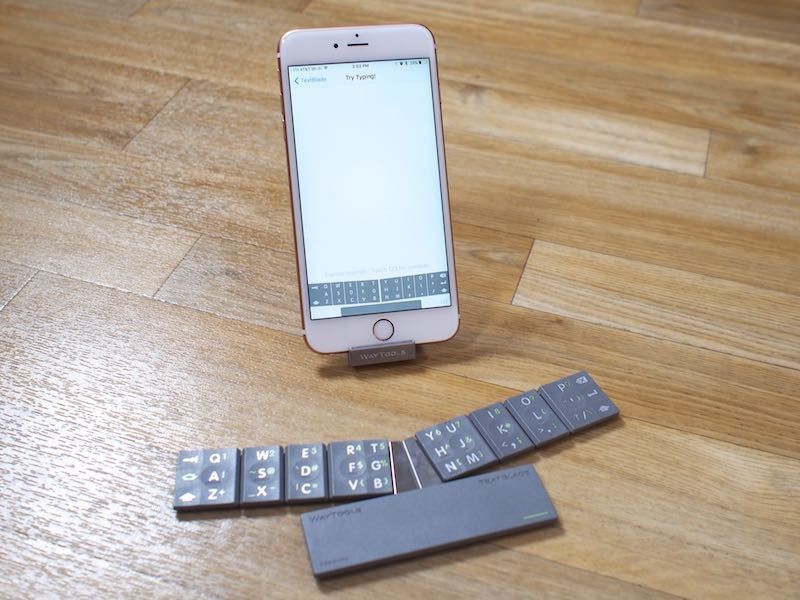 One of the details I'm not able to mention is the Early Adopter gift that will be provided to customers who already pre-ordered or pre-order now before the TextBlade's general release, but I think most people will be pleased with it.

The Early Adoption period ends when the TextBlade starts shipping, but for now, there's still an option to get the free MultiMap software and a FutureProof Guarantee, where WayTools will replace TextBlades during the first year if any major hardware revisions are made. As a warning, new customers should know that orders aren't going to ship out until previous pre-order customers have received their shipments. 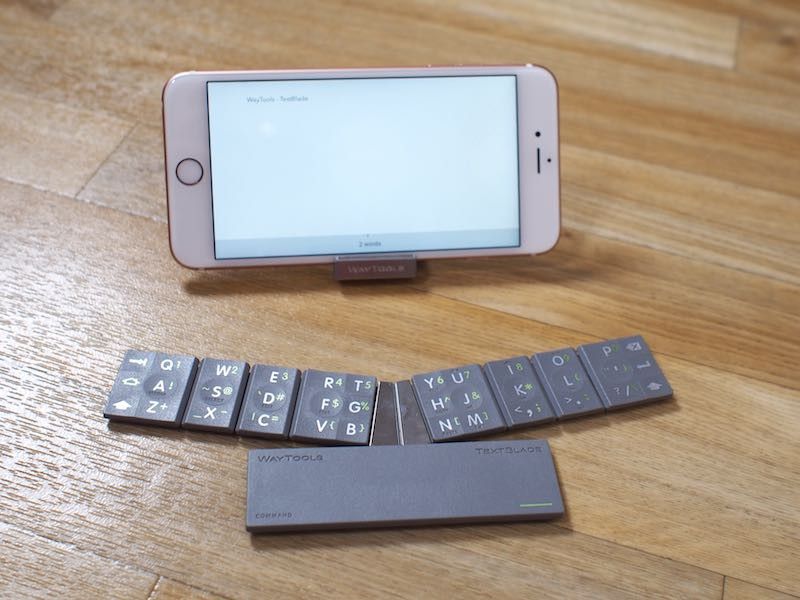 As I mentioned, pre-orders will ship after the testing period is complete. I realize that after months of waiting, more waiting doesn't sound at all appealing, but with TextBlades in the hands of testers, pre-order customers can at least get a concrete idea of what to expect out of the TextBlade through the hands-on experiences and opinions shared by testers.

WayTools' taciturnity on the TextBlade between sparse development updates has been the most frustrating aspect of the wait for many customers, but with a launch on the horizon, that silence is at an end.