Last Friday, Apple launched a worldwide replacement program for faulty USB-C charge cables produced from April to June of 2015 and sold either as a standalone product or alongside the 12-inch Retina MacBook.

At that time, Apple said it would automatically ship new replacement cables out to customers who supplied a valid mailing address when purchasing or registering their products, and as of today, customers have started receiving new USB-C cables. As shared on reddit, MacBook owner iPhonedo received a package from Apple that included a new USB-C cable and a letter explaining the USB-C cable replacement program. 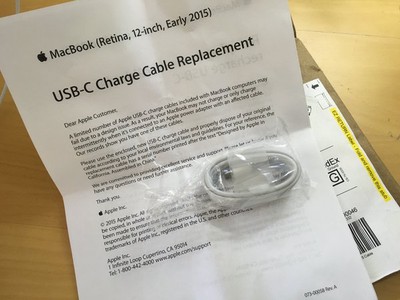 A fedex package was left by my door today. And inside of it, there was a new USB-C cable from Apple. Along with a letter that says some cables may be faulty. Referring to the USB-C Cable replacement program. This is very nice because it saved me from getting a Genius Bar reservation and a trip to the Apple store.

According to Apple, the first USB-C charge cables sold alongside the Retina MacBook can potentially fail due to a design issue. When used, these affected cables may cause the MacBook not to charge or to charge only intermittently when connected to a power adapter. Affected cables can be identified by their labeling, which reads "Designed by Apple in California. Assembled in China." Redesigned cables have the same text, but also include a serial number.

MacBook owners and customers who purchased a standalone USB-C charging cable can expect to begin receiving their replacement cables directly from Apple starting this week. Customers who believe they are eligible for a replacement but have not received a replacement cable or want to check on their status can contact Apple Support or visit the Genius Bar at an Apple retail store.

Apple launched the Retina MacBook in April of 2015, so problematic cables were sold for approximately two months before Apple introduced a redesigned version. Apple will replace affected USB-C charge cables until June 8, 2018.

Sirious
I love how Apple is handling this. No big loud recalls, just quietly distributing replacement cables and asking customers to get in touch with them otherwise.
Score: 4 Votes (Like | Disagree)

Where is the apology in the letter? Is it really too hard to demonstrate respect for customers by showing contrition?

Where is the 5$ goodwill gift into owner's iTunes accounts? Is it really too expensive to demonstrate contrition and compensate for inconveniencing customers?

As written elsewhere in the site, as a family of Apple fans, users and shareholders, I can't believe how tin-eared and amateur Apple's recall management is.

Apple's recent recalls have been so poorly managed, that they seem as to have been designed by the legal department to satisfy minimal legal requirements as opposed to ensure tracibility, completion rate, customer safety, customer satisfaction and to build a reputation for mythic customer support.

You want compensation for being incomvienced, with money, when you weren't inconvenienced. Let alone you want a gift? LOL!
Score: 4 Votes (Like | Disagree)

Where is the apology in the letter? Is it really too hard to demonstrate respect for customers by showing contrition?

Where is the 5$ goodwill gift into owner's iTunes accounts? Is it really too expensive to demonstrate contrition and compensate for inconveniencing customers?

As written elsewhere in the site, as a family of Apple fans, users and shareholders, I can't believe how tin-eared and amateur Apple's recall management is.

Apple's recent recalls have been so poorly managed, that they seem as to have been designed by the legal department to satisfy minimal legal requirements as opposed to ensure tracibility, completion rate, customer safety, customer satisfaction and to build a reputation for mythic customer support.

Apple is automatically shipping one out to you for free- they arent even forcing you to bring the cable into a store. Most companies don't give you a "goodwill" gift, and when they do, its only normally because they meesed up while trying to fix the problem. To me, it seems like an average or even above average replacement service.
Score: 3 Votes (Like | Disagree)

Markoth
Apple's expensive cables have been poorly designed for a long time now. I can think of a number of equally-priced/cheaper alternatives that'll give you far superior longevity. I can honestly say that I am never surprised when my Apple-provided cables fail me, so long as it isn't my MBP's power adapter. That's the only one you can't legitimately buy from third-parties... Luckily, I've only had issues with that once!
Score: 2 Votes (Like | Disagree)

As noted in my previous critique, this is one more aspect of Apple's incompetence in conducting a watertight recall campaign. Apple likely has the most comprehensive customer contact database of any company on earth given devices connect to iCloud and iCloud is connected to the owner's email address.

In the case of 20W charger adaptor switch an electrocution risk, Apple didn't leverage this database, it didn't pop up a message box on users devices with instructions on how to do/request an exchange, it merely did a press release and put a link in its website.

If you moved, you can request one from Apple. There's no safety concern with the cable, the defective ones simply charge intermittently. If someone has a defective cable, their first impulse would be to contact Apple or research the problem. In both cases they'd find out about the replacement program. The cables they are mailing are done out of convenience, not necessity. Most companies do absolutely nothing to inform their customers of stuff like this. You mistake your own entitlement for a fault of Apple's. Could they handle this differently? Sure, but there's nothing inherently wrong with this route.

PS: There were 12 cases of electrical shock total in the adaptor recall you mentioned, it was largely precautionary. Furthermore, guess what a press release is for? The press. Who then inform the public, that's their job. Your "pop-up" solution would ignore anyone who bought a used device, or require Apple to keep a lot more user data on people than they actually do.
Score: 2 Votes (Like | Disagree)

Update: Fedex just dropped another one off. They must have shipped one before I called about it, so now i have 2
thanks Apple!
Score: 2 Votes (Like | Disagree)
Read All Comments