London Mayor Boris Johnson tried to convince Apple to fund the UK capital's project to build a "Garden Bridge" across the River Thames, as reported by Business Insider.

The report cites an article published today in The Architects' Journal which details how Johnson secretly travelled to California in early 2013 to meet Apple executives and pitch the ambitious project, before he had received official backing for the scheme from his office. 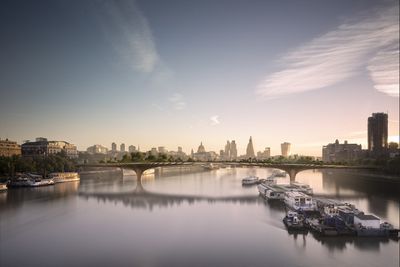 Proposed design for Garden Bridge over the River Thames (Image: Arup)
Apple is well known for its intense interest in architectural design and its close attention to detail when planning and building its retail stores. However, it has little history of funding projects unrelated to its technology business, making Johnson's attempts to woo the company seem ill-judged.

In a statement given to The Architect's Journal, the London Mayor's office confirmed a meeting indeed took place with Apple to discuss "investment opportunities in London." However, Apple informed the publication that the company has "no involvement in this bridge project and is not considering getting involved."

ArtOfWarfare
What exactly would Apple have gotten out of this?

They're all about architecture when it comes to selling products... But that bridge isn't part of any of their stores. Would it be visible from their stores?

Quu
Boris is a bumbling buffoon. And I say that as a Londoner.
Score: 5 Votes (Like | Disagree)

TfL are paying a lot of money towards this bridge, which is one of the reasons this thing is so controversial - it's a vanity project that has pretty questionable value in terms of transport.

e.g.: Cycles won't be allowed on the bridge (London desperately needs better cycle routes, especially crossing the river), and it won't be a public right of way. It may be closed for corporate events, closed at night time, and tickets may be required at peak times.

Still, it's a cool project.

Agreed, it is a cool project and something I wouldn't mind seeing.

However, the main problem is that is a private project, it is operated by a company, not by the city/councils and won't become public space yet they do want to use over £60 million of public money to build this private property. The Londoners who have already paid for the bridge through taxes will then still have to pay an entrance fee because, despite paying for it, it won't be their bridge.

If this bridge receives public money it should serve the public. Instead it mainly serves some private company. The problem is of course that if this was a public project, it wouldn't be built. TfL have dozens of more important things to fund, river crossings for cyclists for instance. At places where there is a big demand to cross the river. Not a vanity project connecting two areas full of millionaires.

Essentially the whole garden bridge project is a scam to funnel public money to private pockets. No wonder this scandal drags on and new dirt is discovered every couple of weeks. I think a few heads will roll before the end of the year.

Why doesn't he ask TfL to help, since they 'reinvest all their income'?

TfL are paying a lot of money towards this bridge, which is one of the reasons this thing is so controversial - it's a vanity project that has pretty questionable value in terms of transport.

e.g.: Cycles won't be allowed on the bridge (London desperately needs better cycle routes, especially crossing the river), and it won't be a public right of way. It may be closed for corporate events, closed at night time, and tickets may be required at peak times.

Still, it's a cool project.

Sirious
Why doesn't he ask TfL to help, since they 'reinvest all their income'?
Score: 4 Votes (Like | Disagree)

wordsworth
Despite the 'garden' aspect, this project truly stinks.
Score: 3 Votes (Like | Disagree)
Read All Comments