Tuesday January 12, 2016 1:39 pm PST by Juli Clover
Apple's iOS 9.3 beta introduces major new features like Night Shift, but there are also dozens of little tweaks to be discovered in the operating system update. It appears that one of those minor changes applies to Wi-Fi Assist, adding a much-needed feature that allows users to see just how much data it's using.

Wi-Fi Assist data usage can be checked within the Settings app by choosing the Cellular section and scrolling down to the Wi-Fi Assist option. Next to the toggle that turns the feature on and off, there's now a data usage number that displays how much data has been consumed when it is in use. 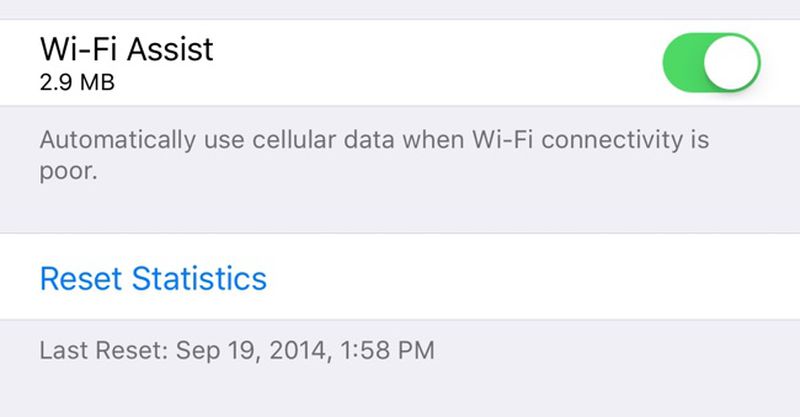 Wi-Fi Assist was first introduced with iOS 9. It's a feature that allows an iPhone to seamlessly switch over to a cellular connection whenever a local Wi-Fi connection is weak. Enabled automatically when updating to iOS 9, Wi-Fi Assist proved to be unpopular with users who claimed it was eating up a lot of data. One recent news story even accused Wi-Fi Assist of causing a teenager to receive a cell phone bill for upwards of $2,000.

Concerns about Wi-Fi Assist led Apple to publish a support document on the feature, explaining how it works and assuring users that data usage should only be a "small percentage higher" than previous usage. Wi-Fi Assist only turns on in a limited number of circumstances and won't activate when data roaming, when apps are downloading background content, or when using third-party apps that stream audio or video.

Despite Apple's reassurances about Wi-Fi Assist, unhappy customers filed a $5 million class action lawsuit over the feature, with the plaintiffs claiming they were subjected to overage charges on their iPhones after updating to iOS 9. The lawsuit also claims Apple did not do an adequate job explaining the feature when iOS 9 was released.

Wi-Fi Assist is available on any iOS device running iOS 9 or later, with the exception of the iPhone 4s, the iPad 2, the third-generation iPad, and the original iPad mini. Wi-Fi Assist can be turned off using the Settings app for those who don't want to risk using extra data.

D.T.
I thought Wi-Fi assist was when my Mom calls me because she can't connect to the internet with her iPad ...
Rating: 36 Votes

gretafour
And yet as I drive away from WiFi and my phone pretends to still be connected, the data activity indicator just goes round and round and nothing loads until the phone finally accepts defeat and switches to cellular.
Rating: 17 Votes

Useless to me, I have unlimited data..

Yeah! What where they thinking making a feature you dont need?! What a bunch of morons!
Rating: 10 Votes

FSMBP
Would be nice if iOS quickly showed my monthly data-usage (that reset automatically) and would give me notifications when I'm X% close to my data cap.
Rating: 8 Votes

taptic
I really like this thing where Apple adds functionality to an OS without having to make a big show about it and increase the first number by 1.
Rating: 5 Votes

marcr1230
Wifi Assist is great for anyone in an urban environment with lots of weak or transient Wifi signals (like when you are on a bus or train) - rather than trying to connect for 30 seconds to an unusable wifi signal - your phone stays on cellular/LTE
Rating: 5 Votes

cableguy84
Useless to me, I have unlimited data..
Rating: 5 Votes

I'm glad they did this so I can see how this is affecting usage.
Rating: 4 Votes

And yet as I drive away from WiFi and my phone pretends to still be connected, the data activity indicator just goes round and round and nothing loads until the phone finally accepts defeat and switches to cellular.


I'm with you. Wi-Fi assist never seems to ever work for me as it is supposed to. In my driveway, on the edges of the Wi-Fi signal where the phone shows Wi-Fi, I get zero connectivity. I have to manually turn off Wi-Fi, or drive down to the bottom of the driveway and wait for it to leisurely switch to LTE.

At home, when my Mac has hijacked my entire download bandwidth while uploading my iCloud Photo Library (seems odd, but it's a fairly widely reported issue with Photos/iCPL, likely related to ISP throttling but also very poorly managed by Photos... and likely a problem for me for several more months (!) due to the bizarrely slow iCPL uploads and a 500+ GB photo library. Anyways...) cellular *never* kicks in. I and my wife, both with phones running iOS 9, have to manually turn off Wi-Fi on our phones to even so much as download an email message.

I've got unlimited data and fast LTE, so I'm not really clamoring for this usage data, aside from my curiosity about whether this feature *ever* works. Because in my experience, Wi-Fi Assist doesn't work *at all*.
Rating: 2 Votes