Apple's latest beta, iOS 9.3, brings quite a few changes to iOS 9, including a new "Night Shift" feature. Night Shift is designed to cut down on the amount of blue light an iOS device is putting out during the evening hours, based on studies that have demonstrated that blue light can negatively impact sleep by altering the body's circadian rhythm.

With Night Shift mode enabled, when the sun goes down, the iPhone's screen will automatically change towards the warmer (yellower) colors in the spectrum, reducing blue light. In the morning, the display automatically turns to its normal temperature color, mimicking natural daylight. 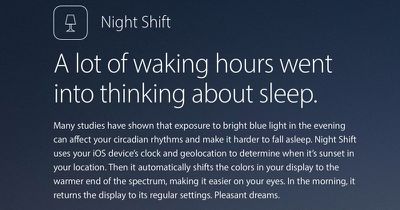 Many people who use f.lux on the Mac are likely already familiar with the type of visual changes to expect with Night Shift mode. f.lux is an app that has been available for free on the Mac for several years, successfully cutting down on the amount of blue light that users see at night.

In fact, f.lux recently attempted to introduce an iOS app that featured the same functionality, but because it used private APIs, it skirted the App Store by asking users to side-load the app on their devices using Xcode, something Apple asked f.lux to put a stop to shortly after it was released.

At the time, Apple said that asking users to side-load an app violated the Developer Program Agreement, and f.lux was forced to stop providing the app to iOS users. F.lux appealed and asked Apple to allow the necessary APIs for a legitimate App Store app, but it appears Apple was working on its own in-house solution instead.

Night Shift is currently available to developers who have downloaded the iOS 9.3 beta. Today's beta also includes several other important features, including the ability for an iPhone to connect with more than one Apple Watch and improvements to Apple News, Notes, Health, and CarPlay.

Update: The Night Shift feature appears to be limited to iOS devices that have a 64-bit processor. That includes the iPhone 5s and later, the iPad Air and later, and the iPad mini 2 and later.

assuming they implement as well as f.lux this is mind blowing
[doublepost=1452538792][/doublepost]has anyone tested it yet?

Fantastic, a completely original and innovative idea from Apple. I can't wait for them to implement this....;)
Score: 17 Votes (Like | Disagree)

assuming they implement as well as f.lux this is mind blowing
[doublepost=1452538792][/doublepost]has anyone tested it yet?

If they implement this in OS X as well, it'll be even more mind-blowing.
Score: 16 Votes (Like | Disagree)

KidAKidB
So basically Apple blocked f.lux from releasing their app and then baked the idea into the OS instead.
Score: 14 Votes (Like | Disagree)