Ahead of the Apple Watch's launch, many high-end Swiss watch makers were critical of its design and Apple's efforts to position it as a high-fashion item. TAG Heuer CEO Jean-Claude Biver went as far as to call it "too feminine," saying the Apple Watch looked like "it was designed by a student in their first trimester."

As time has passed, opinions on the Apple Watch have changed. It has prompted some high-end luxury watch makers to consider delving into the smart watch market themselves, and it also seems to be the inspiration behind high-end watchmaker H. Moser & Cie.'s latest product. 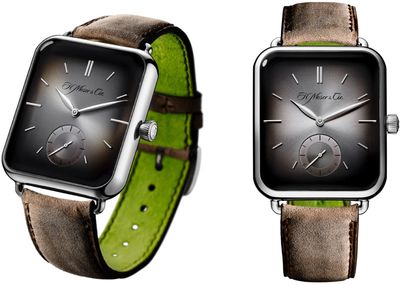 Shared today by watch site Hodinkee, H. Moser & Cie.'s Swiss Alp Watch has a design that's immediately familiar, featuring a rectangular watch face with curved, rounded edges, a crown at the side, and Apple Watch-style lugs for holding a band in place.

The resemblance between the Swiss Alp Watch and the Apple Watch is purely physical. There is no processor, no OLED display, and no sensors in the Swiss Alp Watch, which is entirely mechanical. When flipped over, there's no heart rate sensor -- instead, the inner mechanics of the watch (a finished tonneau movement with a Straumann hairspring, according to Hodinkee) are visible through a clear sapphire crystal panel.

H. Moser & Cie. does not mention the Apple Watch on its website or in its marketing materials, but when speaking to Hodinkee, H. Moser & Cie. CEO Edouard Meylan said the Swiss Alp Watch is symbolic, serving as a proof traditional mechanical watchmaking has a future in a world where the digital smart watch is becoming commonplace. Swiss watchmaking, he says, has weathered other challenges and it will continue on.

"Today, H. Moser & Cie. launches the Swiss Alp Watch as a statement of this new challenge and to prove that traditional mechanical watchmaking has a future, and it is, in fact, the future. It is much more than a watch for us. The Swiss Alp Watch is symbolic. It represents our resilience, our ferocious desire to fight for our values and traditions. It embodies everything we believe in."

Given that H. Moser & Cie. is pricing the white gold Swiss Alp Watch at $24,900 with only 50 pieces available, it's unlikely Apple will take offense over the copycat design.

The full story of the H. Moser & Cie. Swiss Alp Watch, which includes background color on the Swiss watch industry and hands-on details, can be read over at Hodkinee.

morcutt11
It looks too feminine. It looks like it was designed by a student in their first trimester....
Score: 34 Votes (Like | Disagree)

Menel
$25k for a device styled as a blatant ripoff? LMAO
Score: 20 Votes (Like | Disagree)

SSDGUY
Wow. For probably the first time, Apple has made ugly cool.
Score: 16 Votes (Like | Disagree)

Oblivious.Robot
Thanks for the laugh, needed that on my birthday.

Context - Was letting my girlfriend know that I wanted Apple Watch Edition today, she laughed, so I told her I want this particular Apple watch replica and just showed her the picture of the watch, she agreed, then I let her know that it costs 25k. Cherished the moment. :D
Score: 15 Votes (Like | Disagree)

Wow. For probably the first time, Apple has made ugly cool.

You have no taste. Apple Watch has a great, unisex design that fits perfectly today's clothes shapes.
Score: 12 Votes (Like | Disagree)
Read All Comments