Last month Pandora announced that it acquired "key assets" and employees from Rdio for $75 million. Tonight, Rdio began emailing its users to let them know that it would officially shut down on December 22, 2015 at 5 p.m. PST. 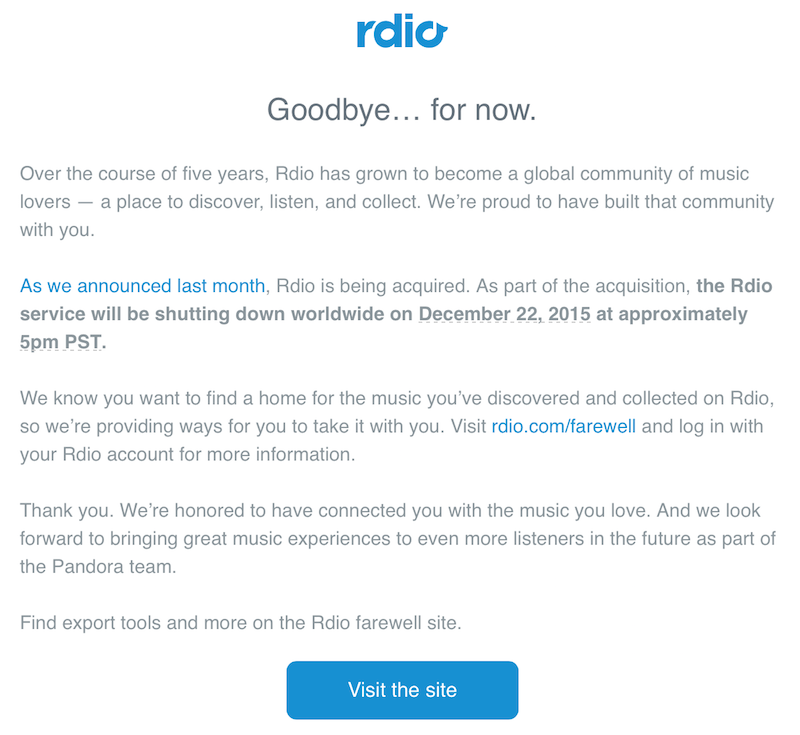 Rdio will also let its former subscribers download an archive of their favorite music and playlists in various formats so that they can import them into their new music streaming service of choice. The service also created a timeline that allows users to see their "life on Rdio", including a user's most played song and album and the first playlist they created.

The streaming service also shared its own timeline. Rdio revealed that its first subscriber signed up on August 3, 2010, that the first played song was Katy Perry's "California Girls", the most played album was Drake's "Nothing Was The Same", the most played song was Bruno Mars' "When I Was Your Man", the most popular playlist was Dave Novak's "1000 (April 2015)" and the company's favorite comment was "Very touching tribute to turning things down for reasons we forget," regarding DJ Snake and Lil Jon's "Turn Down For What."

Rdio subscribers can download their collection and view their timeline at Rdio's farewell page.

I can't believe that whiny, obnoxious song was the most played song. Every time I hear it I want to gouge my ears out!

its almost as if different people have different tastes compared to you
Rating: 10 Votes

I always was a Dr. Pepper person, myself.
Rating: 5 Votes

I couldn't see them running Apple Music as a permanent loss leader, that's not in their DNA. I'm not suggesting that Apple Music is actually running at a loss because Apple is already losing money during the 3 month trial period and it doesn't make a lot of sense to enter the market if they are still going to lose money once the customer starts paying for the service.

Apple has 7 million paying customers right now... so that's at least $70 million a month coming in.

How much does it cost to run?

You're right that Apple loses 3 months worth of profits on the free trial... but Spotify loses way more on their free tier. Doesn't Spotify have 80 million free customers? Those free ones are killing them. Spotify has to pay each time a free customer streams a song. Yikes.

My point was simply this: Apple could lose money on Apple Music because they make so much more money on hardware anyway.

But when Spotify loses money... their entire business is devastated.

That's quite a big difference.

"The future for Apple Music isn’t just about music. It’s about the iPhone, Siri, Apple TV, and CarPlay. Apple doesn’t need Apple Music to win to succeed; it just needs to help Apple sell more phones, tablets, TV boxes, and whatever else Apple decides to invent down the road. The irony is that, the same reasons that Apple isn’t dependent on Apple Music for its success as a business make it all the more likely Apple Music will win anyway."
Rating: 2 Votes

Guess what... Spotify doesn't either.

That doesn't sound like Coke or Pepsi at all... although I know what you are trying to say. :)

Streaming music is a terrible business to be in. All the money you make gets spent back on licenses fees (and then some!)

The only companies who will be able to run a streaming music service are giant companies like Apple, Google, Amazon, etc. They can afford to run it at a loss if they had to... since they make money in other areas.

Michaelgtrusa
They will be missed.
Rating: 2 Votes

I can't believe that whiny, obnoxious song was the most played song. Every time I hear it I want to gouge my ears out!

Zirel
They have posted this on their Twitter, when Apple Music was coming out… 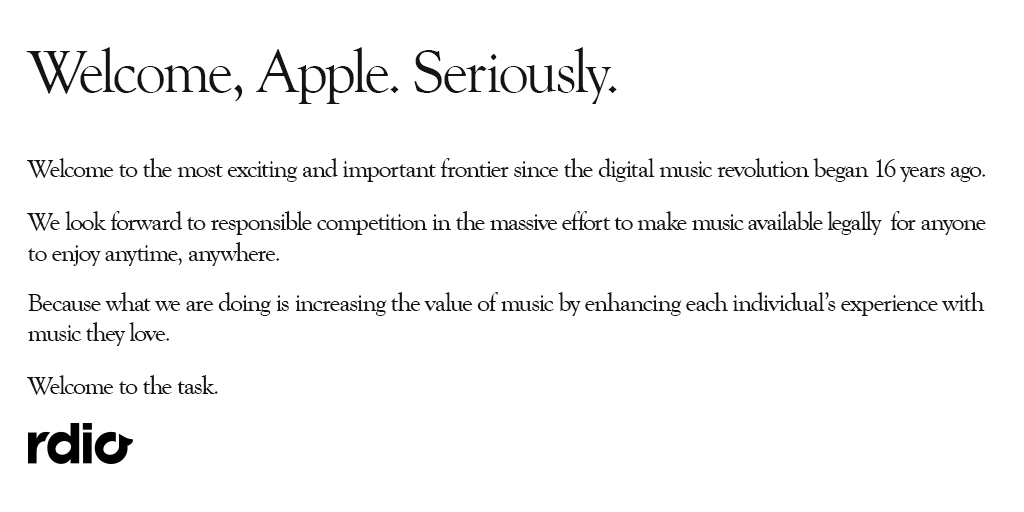 
LOL... That's a joke right. More like Pandora and Spotify...If there were a third brand like Nuka-Cola, that would be Google Play Music. (My personal go-to.) Everything else will die off. Apple music will be dead within 2 years... i promise you. THe fact that Apple is giving away subs to its employees with beats headphones (another dying brand), ought to be a red flag to you.
Rating: 1 Votes
[ Read All Comments ]