Apple continues to ramp up promotion of the new Apple TV, building on its series of advertisements focusing on the television shows and games available to users on the set-top box. As noticed by MacRumors reader Jordan, the company has begun to expand its previous colorful billboard campaign by featuring content available on the new box, including an ad themed after The Simpsons. 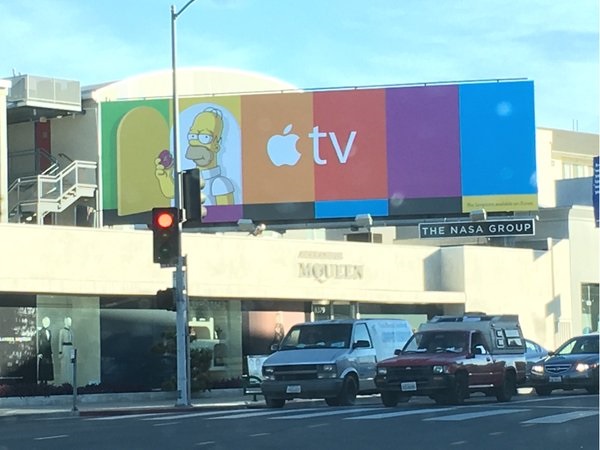 The billboard is similar in theme to the multi-colored advertisement campaign Apple introduced following the launch of the new Apple TV. Over the weekend, the company used its official App Store Twitter account to continue the campaign and share a few new tie-in ads. So far it has promoted various games, apps like Nat Geo TV, and television shows including Veep and Game of Thrones.

Apple began its new Apple TV campaign in the middle of November, a few weeks after the device launched in late October. Some of the earlier commercials included promotions of Crossy Road, Orange is the New Black, and The Muppets, all playing on the fourth-generation Apple TV.

"Winter is Coming" I still get shivers when someone says that.

cchunk
Saw this one yesterday on the 405 by the Howard Hughes in LA.

LordQ
"Winter is Coming" I still get shivers when someone says that.
Rating: 1 Votes
[ Read All Comments ]