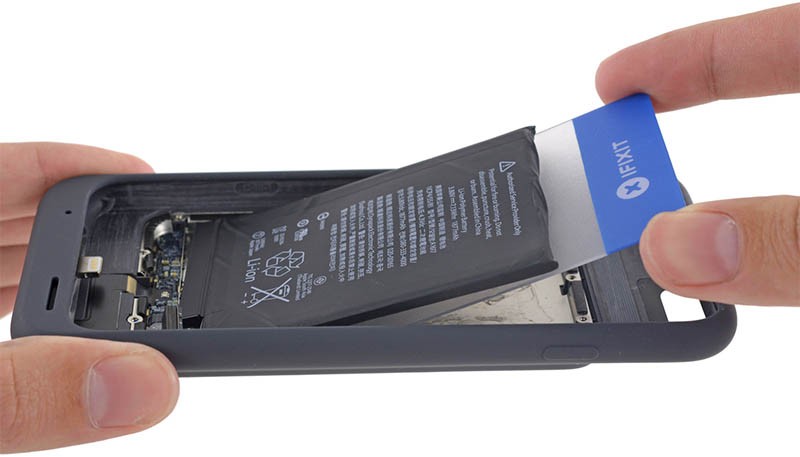 The inner aluminum plate serves as a door for the battery compartment, which houses a 1,877 mAh battery (7.13 Whr) that more than doubles the iPhone 6s battery capacity of 1,715 mAh. iFixit says the battery is "very strongly adhered in place" with a connector rather than soldering.

Much of what makes Apple's Smart Battery Case "smart" is powered by the iPhone, as the case only has a few other components, including a NXP NX20P3 load switch, also found in Lightning to USB cables, and a NXP 1608A1 charging chip. 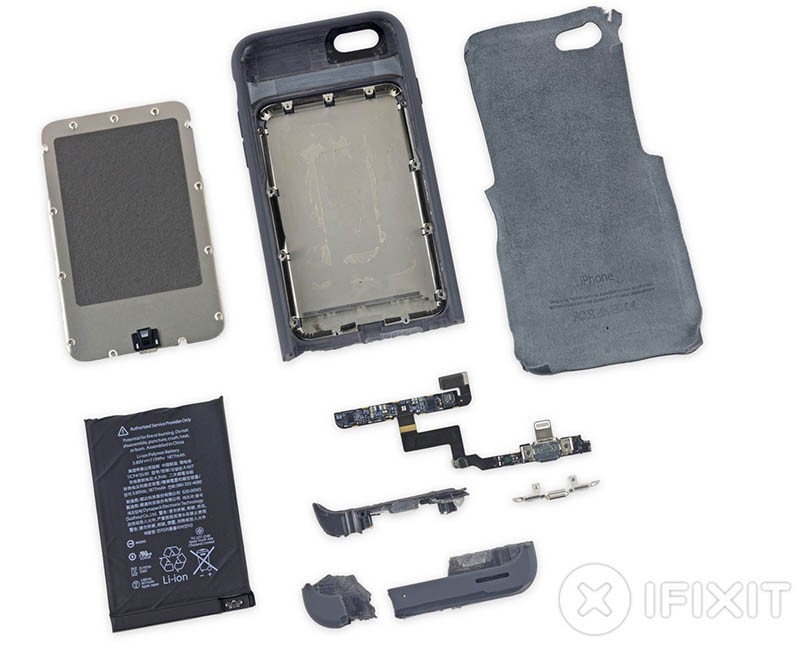 iFixit awarded the Smart Battery Case a repairability score of 2 out of 10, with ten being the easiest to repair. While the battery pack can technically be replaced, the case has a strong adhesive lining, and all other repairs would destroy the accessory.

webbuzz
Has ifixit given a repairability score to their Dev Account yet? :p
Rating: 25 Votes

Sorry, please point me to the complaint about not being able to sell a kit. A link would be nice.


The entire site is a rating on whether or not they can sell you a kit. Here's a link: https://www.ifixit.com/
Rating: 13 Votes

EllieV
Is it wrong that my first thought was, "I can't believe they spent the time and money to do this"?
Rating: 9 Votes

diddl14
Repairability is a thing of the past (as we meanwhile know it's close to 0). A durability and recyclability scale would be much more interesting..
Rating: 9 Votes

pgiguere1
It's an accessory, I don't think people would expect it to be repairable to begin with.

I'm not sure Apple themselves would bother repairing them, they probably just give you a new one and recycle what they can.

We might as well give Apple's cables, adapters and headphones a repairability score as well while we're at it.
Rating: 9 Votes

0098386
I guess I fall into a minority where I don't hate a website because they gave my favourite company a bad score.

Still such a weird concept to me. I've found iFixit to be very useful in fixing my iPods and iMacs over the years (instead of just binning slightly broken devices). And now very interesting as I learn how well designed some of their newer systems are. But eh, some people just aren't into that it seems.
Rating: 9 Votes

Again, another Apple release, another ifixit complaint piece about how they can't sell kits.

Sorry, please point me to the complaint about not being able to sell a kit. A link would be nice.
Rating: 7 Votes

Skika
What a surprise
Rating: 6 Votes

Repairability is a thing of the past (as we meanwhile know it's close to 0). A durability and recyclability scale would be much more interesting..

I can’t wait until the day you take your car for a cam belt change and they tell you that the engine is sealed and you need a new car.
Rating: 5 Votes

Kaibelf
Again, another Apple release, another ifixit complaint piece about how they can't sell kits.
Rating: 5 Votes
[ Read All Comments ]