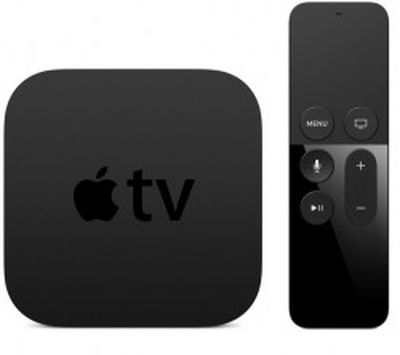 Apple will begin trial production of a fifth-generation Apple TV in December 2015, with supplier Quanta Computer ramping up volume production in the first quarter of 2016, according to Taiwanese website DigiTimes.

Apple will also reportedly adopt a "heat-dissipation solution" in the streaming box to handle the faster CPU, but it remains unclear how that would differentiate from the large heat sink in the fourth-generation Apple TV. The report adds the next Apple TV will also gain unspecified "new functions."

The report does not provide a release timeframe for the fifth-generation Apple TV, but it is unlikely to be soon given that Apple just released the fourth-generation Apple TV in late October. Apple beginning volume production in early 2016 would seemingly make a mid- to late-2016 launch possible.

DigiTimes has a mixed track record at reporting on Apple's upcoming product plans, so this rumor should be treated with caution until or unless other reports substantiate these claims in the weeks and months ahead.

There we go, all further comments are conveniently summed up right here.
Score: 41 Votes (Like | Disagree)

I call ********. When have Apple ever superseded a brand new product inside of 12 months? Click-bait trash.

If it's released in 2016, I doubt the next Apple TV will support 4K.
All the factors working against wider 4K adoption today will remain in place in 2016...

* 4K resolution requires a very large (80"+) screen or very close viewing distance to be appreciated
* Most people don't own or have the space for an 80"+ TV
* Mot people don't want to view a 60" TV from 5 feet away
* Most Americans don't have sufficient bandwidth to stream 4K video at good bitrates w/o terrible compression
* Major ISPs in the US are imposing data caps that would make streaming 4K video prohibitively expensive for most
* Very little content is currently available in 4K
Score: 30 Votes (Like | Disagree)

There we go, all further comments are conveniently summed up right here.

Lotti
I call ********. When have Apple ever superseded a brand new product inside of 12 months? Click-bait trash.
Score: 17 Votes (Like | Disagree)

From what distance do you view your 40" 4K Samsung TV? 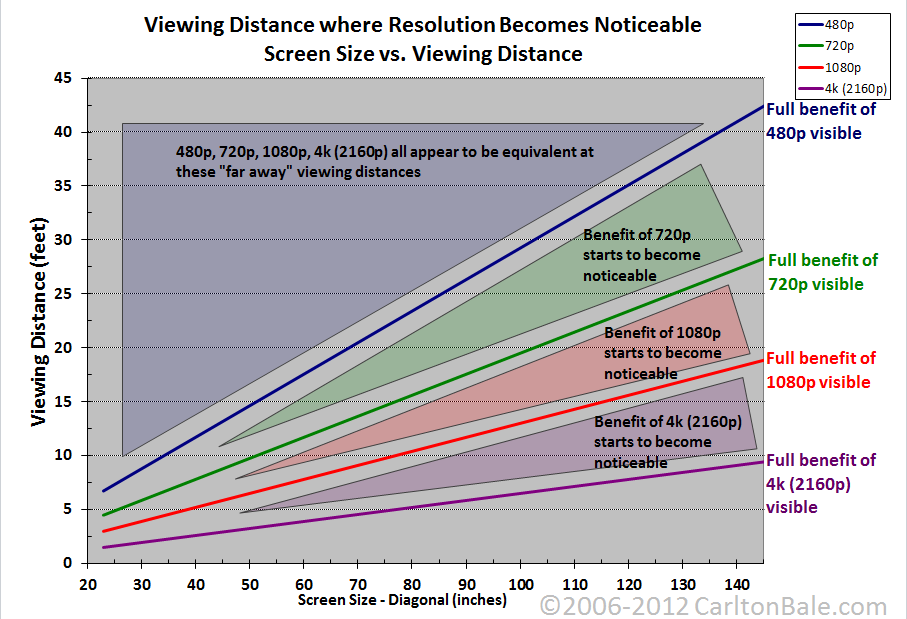 Ahhh, the "chart". It always comes out in arguments against the next resolution not currently able to be played by an Apple TV. Note the copyright date range. If you do a search and hop back to the :apple:TV threads before the "3", you'll find the very same chart, very same colors, etc minus the references to 4K. Back then, it was used just as often... and just as passionately... by those arguing why nobody needs a 1080p :apple:TV while Apple still clung to a 720p MAX.

Then, Apple rolled out the third generation "now with 1080p" and all the people who had slung around "the chart" didn't sling it around to bash Apple for being so stupid to embrace 1080p. Instead it was mostly "shut up and take my money".

Flash forward to the emergence of 4K in just about about everything else Apple offers and the very same chart is updated adding in 4K... and the very same arguments of why we don't need a 4K :apple:TV is being argued while Apple is selling an :apple:TV model that can't play 4K.

When Apple rolls out a 4K :apple:TV as implied by this rumor (and don't we all know it's coming whether this rumor has any merit or not?), will "the chart" be used to bash Apple for being stupid to embrace 4K in an :apple:TV5 or will history repeat? I'd bet heavily on "shut up and take my money" again.

For some reason, some of us will passionately argue against whatever Apple doesn't have for sale right now but then love it as soon as Apple does embrace it. Right now those people have to have split minds because Apple has already embraced 4K in just about everything else. You don't find them bashing 4K in all of the other Apple products, nor do you see much reference to "the chart" bashing against the uselessness of a 4K camera in the iPhone or 4K editing & rendering in iMovie of FCPX, even on iPad Pro. It's just stupid here... in this ONE Apple product line... and only until Apple does roll out a fifth generation "now with 4K" when all this anti-4K, "you can't see a difference", "until the whole internet is upgraded", "until every thing in the iTunes store", "the storage", etc evaporates... overnight... replaced by many of these same people in the "shut up and take my money" line to buy one.
Score: 17 Votes (Like | Disagree)
Read All Comments