iFixit has posted a hardware teardown of the new fourth-generation Apple TV, providing a closer look at the set-top box's A8 chip, flash storage, redesigned power supply with a larger heat sink and other logic board components. The website also provided a teardown of the accompanying Siri Remote. 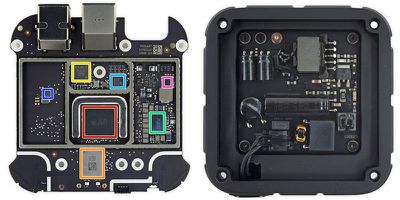 critter13
"We noticed a distinct lack of cables connecting the power supply to the logic board. We're theorizing the power is either transmitted by magic, or through the heat sink screw posts."

Why do Apple devices look so great in the inside as well.

Because Steve Jobs' legacy lives on in present day Apple.

The one quote I remember is during a keynote when he said the back of the computer (The Bondi Blue iMac) looked better than the front of everyone else's computers. Classic Steve :D
Score: 9 Votes (Like | Disagree)

What was the reason Apple omitted optical audio out?

Maybe because many TV's now have ARC and the Toslink cable can come from the TV to the audio system.
Score: 6 Votes (Like | Disagree)

Not knowing much about the whole regionalisation of TV, how much of a disadvantage do people in Europe have regarding access to services and shows compared to our American cousins?

What was the reason Apple omitted optical audio out?

Yeah, it's a bit disappointing to me, as well, but then maybe I'm a marginalised case user.

Like the other person replied, a lot of TVs have their own optical out, but I my favourite use of the TV was to airplay music from iTunes on my computer to my home theatre sound system from 2003 which had multiple optical in ports but no HDMI inputs. Basically I had it set up so that I could not have my TV turned on (i.e. not waste electricity) and still have music play.

TL;DR — A lot of my sh*t is outdated and probably needs replaced.
Score: 4 Votes (Like | Disagree)

Dilster3k
Why do Apple devices look so great in the inside as well.
Score: 4 Votes (Like | Disagree)
Read All Comments