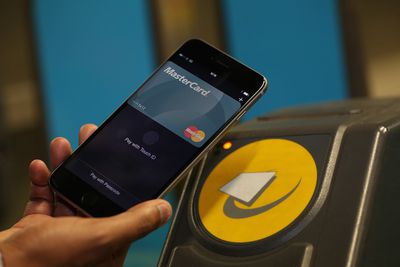 Starting today, and on the next three Mondays, MasterCard customers using Apple Pay to touch in and out on London's public transit network will have up to £27.90 in daily fares refunded by MasterCard. The promotion is valid for travel on the Tube, buses, tram, DLR, London Overground and most National Rail services in London.

“The move by TfL last year to accept contactless cards and devices on London Underground has been a phenomenal catalyst to the growth in contactless payments across the UK. Now that Apple Pay has arrived we want to encourage travellers on London’s transport network to try it out and give them another convenient option to pay for their travel. What better way to do this, than to offer MasterCard customers using Apple Pay the chance to travel for free over the next four consecutive Mondays.”

MasterCard competitor Visa today also unveiled a new Apple Pay "Ready" campaign in Europe, including two TV ads from agency Saatchi & Saatchi that highlight how fast, easy and reliable using a Visa card in Apple Pay is in everyday situations such as paying to use the Tube or in a cafe.

I've come to expect huge numbers of negative and apple bashing posts for any given article. But I saw this article and wondered how anyone could possibly have anything negative to say about it. I was wrong.
Score: 19 Votes (Like | Disagree)

Gimmick. And, since NFC is slower than Oyster, this is just going to cause unnecessary congestion.

Unnecessary for who? People are saving money. We recently visited London (from the US) recently, and after a few days, I was AMAZED how good the tube system is in London. I was also amazed by how rude Londoners were, with their dirty looks and pushing and shoving, because we weren't moving through the entry points fast enough for them. Then I thought, "Why is everyone in such a hurry when trains leave EVERY MINUTE OR TWO!!!!! Literally, if you miss a train, another one shows up in a minute. It's a great system! But people are rushing through like it's the end of the world or something.

It's ONE DAY a week. People save money. Relax.
Score: 9 Votes (Like | Disagree)

Decent public transit? Me neither.
Score: 9 Votes (Like | Disagree)

Gasu E.
London only??? I'm going to link to this every time a Brit complains about being shut out of a MacRumors Giveaway. :D
Score: 7 Votes (Like | Disagree)

They're digging the tunnel for the London Tube under the Atlantic Ocean as we speak.
Score: 5 Votes (Like | Disagree)

Not sure you'll see much of an increase in ridership. How many people who wouldn't ride the train normally are going to go through the trouble of setting up their Apple Pay to take advantage of this for one day's free ride over three weeks?

Gimmick. And, since NFC is slower than Oyster, this is just going to cause unnecessary congestion.

It is a bit of a gimmick. But I think it's more about building awareness than anything else. And to that end I support it wholeheartedly. Getting people to start thinking about the benefits of contactless payment/Apple Pay and its other applications is a good thing, IMO.

It's been a few years since I rode the London transit system, so I confess that I don't know how many people use paper passes vs. cash vs. Oyster Card. But I know here in Denver, where we have NFC touchless readers on our buses and trains the biggest holdup is people who pay with ride coupons and cash. And I would love the opportunity to have my Eco Pass on my iPhone, so I don't have to fumble to pull my card out of my wallet.
Score: 5 Votes (Like | Disagree)
Read All Comments