Though the iPad Pro has been widely available in Apple retail stores since its launch last Wednesday, supplies of the Apple Pencil and Smart Keyboard have been much more limited. At launch, there were no Apple Pencils or Smart Keyboards available for purchase in the U.S. with in-store pickup, and the first online orders listed delivery dates of November 19 at the earliest, more than a week after the iPad Pro became available. 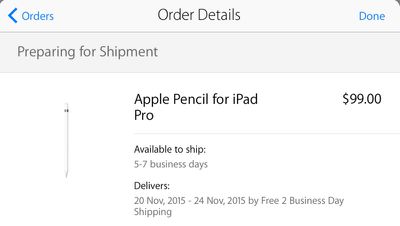 With orders already preparing for shipment, it's likely customers who managed to pre-order right around midnight on November 11 will start receiving their shipments later this week. A few customers in the United Kingdom have already received their Apple Pencil orders.

Some Apple retail stores around the country have been receiving small Apple Pencil and Smart Keyboard shipments on a daily basis, but as Apple is not allowing in-store pickup for the Apple Pencil, it's not possible to use Apple's website or app to determine which stores have stock. Instead, customers hoping to get an Apple Pencil before December are having to visit their local Apple Stores on a daily basis hoping to get lucky with shipment timing.

The Apple Pencil, which enables pressure sensitive drawing on the iPad Pro, retails for $99. The Smart Keyboard is priced at $169.

macjunk(ie)
Wait a minute...This does not come with the iPad Pro? Wow!
What wizardry exists in the pencil that it costs as much as the old Apple TV?
Score: 18 Votes (Like | Disagree)

Ekuk
Here in the uk, my iPad pro arrived last Thursday, the smart keyboard and pencil arrived on Saturday. Doodling has commenced. I'm no artist but it's good

BillyMatt87
The Apple Pencil should've been included with every iPad Pro purchase. $99 for a glorified stylus is a ripoff!
Score: 11 Votes (Like | Disagree)

APlotdevice
Wish the darn thing worked with more than just the Pro.
Score: 11 Votes (Like | Disagree)
Read All Comments