Cue described the iPad Pro as great for consuming content, such as emails, news and websites, and spoke in general terms about how Apple pushes itself to "create tools that let people solve incredible problems." He also praised the tablet's new four-speaker design that delivers stereo sound.

"One of the things with the iPad Pro that’s amazing is the sound — it’s got four speakers on it," said Cue. "And so the first time -- even myself as we were developing it -- I got my hands on it and I heard it, it changed the way I thought of the product even. I didn’t realize how much of a difference it was going to make that you have stereo sound coming out of a device like this."

Cook also said the iPad Pro delivers a "first-class audio experience," and called the tablet a capable "laptop replacement" when used with a Smart Keyboard. The chief executive further emphasized that the Apple Pencil is not a stylus, but rather a sketching tool that complements the iPad Pro's traditional multi-touch input. 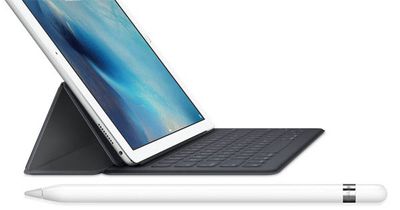 “Well, we didn’t really do a stylus, we did a Pencil. The traditional stylus is fat, it has really bad latency so you’re sketching here and it’s filling the line in somewhere behind. You can’t sketch with something like that, you need something that mimics the look and feel of the pencil itself or you’re not going to replace it. We’re not trying to replace finger touch, we’re complementing it with the Pencil.”

Cook believes the iPad Pro's target market will consist of a lot of PC users, customers without Apple products and existing iPad users looking to upgrade to a "very different" device. The tablet also has value for creative companies like Touchpress, the makers of several interactive musical apps for Apple devices.

Where the iPad Pro is concerned, Alex Johnston, Chief Marketing Officer, told me: “For a business like Touchpress with the kind of content we like to produce, we value the more beautiful screen, the better audio. We re-imagine familiar music or text in a way to give you fresh perspectives on it. So having more screen real estate allows us to do that a lot.

“The thing that struck me the most,” Johnston went on, “is that it completely transformed the iPad experience when you use the Pencil or the Keyboard with it. It’s not just that I want it because it’s the best iPad, it’s that the tools that go with it allow me to do things that my finger won’t allow me to do.”

Adobe has also shared a video where visual designers, illustrators, educators and other creative professionals offer positive first impressions of the iPad Pro and Apple Pencil, with a focus on Creative Cloud apps including Illustrator Draw, Photoshop Mix, Photoshop Sketch and Photoshop Fix.

Benjamin Frost
It worries me that Eddy Cue's biggest praise of the iPad Pro is its speakers.

Then we have Cook calling it a "first class audio experience." Such hyperbole from Cook only serves to cast doubt on the whole device. I don't think anyone is going to buy an iPad Pro for its speakers, and I think it unlikely that it will outperform my B&O speakers.

If only Steve Jobs was here to spellbind us with his enthusiasm. I'm quite sure that he would have tantalised us with a compelling case for it, just as he did when he introduced the iPad and iPhone.

I think there is a market for the iPad Pro, but let's chop the iPad line. All we need is one iPad mini, one iPad Air and one iPad Pro. Anything more is unfocused fluff.

Yoshi Yogurt
The iPad needs a file management system or else it will forever be a giant iPod touch.
Score: 28 Votes (Like | Disagree)

NickD73
What a joke. How can he say he was surprised at the audio improvement with stereo speakers? Do these people use other products, or are they trapped in their own Apple bubble where everything is perfect until they change it. I think everyone for years now has wanted better iPad speakers.
Score: 25 Votes (Like | Disagree)

apolloa
The usual clap trap marketing BS from them then. And Eddy Cue needs to get out more if all he can come up with is what a revelation 'stereo sound' is! I mean seriously? The guy behind Apple music 'changed the way he thought about the iPad Pro' because it has stereo speakers!

And yes Apple zealots, Jobs IS talking about tablet stylus.

It's all just marketing folks.
Score: 21 Votes (Like | Disagree)

And yes Apple zealots, Jobs IS talking about tablet stylus.

It's all just marketing folks.

Steve was talking about if you needed a stylus to use the tablet, it wouldn't work. Apple Pencil is optional and purely for drawing, not needed for everyday use by an average consumer.
Score: 19 Votes (Like | Disagree)

Rogifan
Seriously Eddy Cue should not be out there pitching this product. He uses it to read email and go to websites? #facepalm
Score: 17 Votes (Like | Disagree)
Read All Comments