The new Apple TV launched on Friday in several countries around the world, giving early adopters a chance to try out the fourth-generation device for a few days now. The consensus opinion is that the new Apple TV is a worthwhile upgrade, particularly because of new features such as the App Store, Siri, and tvOS user interface, with lots of potential to get even better in the months and years ahead. 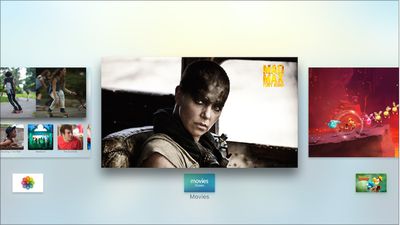 Press the Home button twice to bring up the new Apple TV's app switcher
To complement our coverage of the new Apple TV, which includes a trio of hands-on videos, an Apple TV apps roundup, several tidbits, and a reviews roundup, we have created the following list of tips, tricks, and shortcuts for the new streaming device, some of which are outlined in the Apple TV user guide. The tips are centered upon useful Siri Remote shortcuts and Apple TV settings.

I suppose it's just better to BUY one and learn to use it for yourself, instead of reading a list of bullet points ;)

As I read this article, I asked myself how anyone could possibly complain about an article that nicely summarizes the buttons and the various ways to use them, most of which aren't intuitive, and is very helpful to me, and I have the atv 4.

Then I remembered some of the people who post here, and my fantasy evaporated. And sure enough, the first poster found a way to complain about the article. Part of me wants really express myself which will get me kicked off this board. So I'll just stop here. Very sad, but completely expected.
Score: 24 Votes (Like | Disagree)

haruhiko
Please make a tutorial of:

adampk17
Over all I'd say I'm underwhelmed. The lack of Siri search for local or Apple music and the fact that the Remote app hasn't been updated to work with the ATV 4 at launch are baffling.
Score: 10 Votes (Like | Disagree)

scarecrowmac
This is great! Learnt some really cool time saving features from this article!! Makes me love my new Apple TV that little bit more :) All it needs now is the Plex app and I’m all set
Score: 9 Votes (Like | Disagree)

dearfriendx
Thank you author, for putting this together. Really helps! I love my new Apple TV
Score: 8 Votes (Like | Disagree)

Fortimir
I picked mine up on Friday at launch, and I really like it. It certainly has a more complex layout that the earlier versions.

My main gripe is that I can constantly picking up the remote upside down. It's too symmetrical and the flat/gloss differentiation doesn't really tell the functionality apart.
Score: 8 Votes (Like | Disagree)
Read All Comments