@adrow You are correct. Beats 1 replays do require that you have an active subscription with Apple Music. — Apple Music Help (@AppleMusicHelp) October 30, 2015

The Beats 1: Replay feature was first introduced in early August when all Apple Music users were still under the free three-month trial period. It offers full show replays with guests, commentary, and music. Without access to Beats 1: Replay, those who do not subscribe to Apple Music will only be able to listen to missed Beats 1 radio content by catching it on the second playthrough, 12 hours after the first airing.

Attempting to access a past Beats 1 radio show via an artist's page now brings up an Apple Music login screen for non-subscribers, while subscribers are still able to access the content. Playlists are also inaccessible, but content uploaded to a Beats 1 radio DJ's connect page, such as select interviews, can be listened to without a subscription. 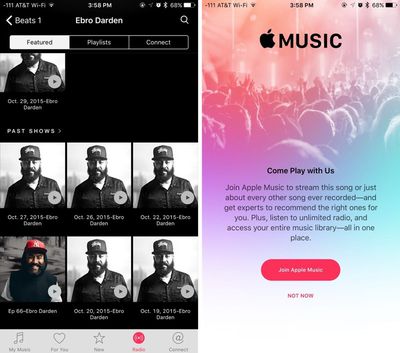 Apple's decision to limit past Beats 1 shows to Apple Music subscribers has undoubtedly been done in an effort to encourage Beats 1 radio fans to purchase a subscription, which is priced at $9.99 per month for individuals and $14.99 for families. In a recent interview, Apple CEO Tim Cook said Apple Music had 6.5 million paying customers along with 8.5 million still on the free trial.

Vanilla35
No one cares about your stupid Beats 1 stuff apple. We won't miss it
Score: 21 Votes (Like | Disagree)

I've heard that this station plays mostly hip hop and rap; so much for Cook's diversity drive.

I'd like to see a station that plays music with no talking. Did the original iTunes Radio do that? We never got it in the UK.

Last time I used it yes ... it was just music. These are 2 reasons I will never use the service. A) I can't stand hiphop, I like dance music and other types of electronic music. B) I want to listen to music, not some talk to me about the music.

Honestly, I think the service will die off in a few years. It's been poorly executed.
Score: 10 Votes (Like | Disagree)

No one cares about your stupid Beats 1 stuff apple. We won't miss it

I care. Several of the weekly shows are excellent.
Score: 8 Votes (Like | Disagree)

jdillings
I can't imagine there are a whole lot of people willing to pay $10 to listen to old Beats 1 radio shows. Apple should have kept them free and used them to promote Beats 1 and Apple Music.
Score: 7 Votes (Like | Disagree)
Read All Comments