The latest numbers from research firm IDC show that Samsung and Apple continue to lead the worldwide smartphone market, but Chinese handset maker Huawei is placing increasing pressure on the industry giants after experiencing strong 60.9% growth compared to the year-ago quarter. 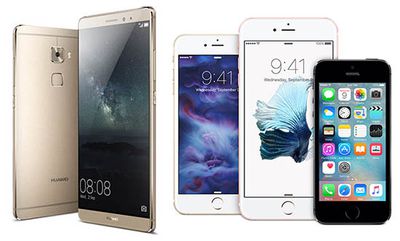 Apple's growth can be attributed to strong iPhone 6s and iPhone 6s Plus sales, which Apple says has led to the highest rate of Android switchers it has ever measured. The new smartphones set a record with 13 million sales over their September launch weekend. Apple released its complete FY Q4 financial results yesterday.

Huawei also closed the gap on Samsung and Apple due to strong growth in China and Europe. The Shenzhen-based company was the third-largest smartphone vendor, a position that previously belonged to Chinese rival Xiaomi, with 7.5% market share and 26.5 million smartphones shipped in the third quarter.

Overall smartphone shipments totaled 355.2 million worldwide in the third quarter, up 6.8% from the 332.6 million units shipped in the year-ago quarter, marking the second highest level of smartphone shipments for a single quarter ever. The growth was driven by new flagship devices such as the iPhone 6s, Galaxy S6 edge+ and Galaxy Note5.

Again, Samsung is too focused on the wrong competitor. Huawei/Xiaomi are eating their lunch.

Beware, because Huawei/Xiaomi is not only chasing Samsung. Premium pricing begs for consistently premium experiences that easily differentiate from cheap clones. But cheap clone makers keep on trying, copying premium features and incorporating them into their cheaper-to-much-cheaper offerings. Eventually, there's so many premium features in the cheap clones that it becomes hard to rationalize continuing to pay the premium.

See the IBM PC story: a premium computer in its day made by a well-respected, premium company who then suffered an "attack of the clones." What happened there?
Score: 4 Votes (Like | Disagree)

Because it offers things an iPhone doesn't.

Once again, this appears to be about shipments, not purchases. I'll wait till actual sales figures come out before rushing to judgement.

If Samsung and others phones weren't being sold, retailers wouldn't stock them. So.. we can assume a very large percentage of these phones are being sold, and a very small number being returned to the manufacturer.
Score: 3 Votes (Like | Disagree)

luiss11
Why in the hell would I buy a Huawei phone?
Score: 2 Votes (Like | Disagree)

mk_in_mke
... Still thinking about Steve Jobs in 2007, during iPhone keynote when he said he only wanted 1% of the Market Share... Almost 9 years after, Apple represents 14% of the market share and 60% of the global smartphone profits (if not more...)

it always amazes me how a company (Samsung) can have such a big lead and loose lots of money while the second placer with a much smaller share makes tons of money. (This is all with respect to the mobile devision of samsung).
Guess they spend too money on marketing and don't charge enough for their devices (especially the lower end ones, that give market share but don't make any money)

Yaaaaayyyy we are getting ripped off by Apple.
Score: 2 Votes (Like | Disagree)
Read All Comments