Apple has announced that its first two retail stores in the Middle East will open in Abu Dhabi and Dubai, the two most populous cities in the United Arab Emirates, on Thursday, October 29. The nearest Apple Stores to the UAE are currently located several hours away in Istanbul, the largest city in Turkey. 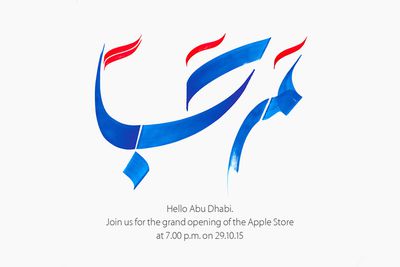 Apple has been rumored to be constructing the "world's largest" Apple Store in Dubai since August 2014, and began hiring for the upcoming UAE store that same month. Apple CEO Tim Cook visited the UAE in February 2014 to discuss the future of the IT sector with Prime Minister Shaikh Mohammed bin Rashid Al Maktoum and other officials.

Apple Watch will be available in Saudi Arabia and the UAE on October 22 as part of the wrist-worn device's eighth launch wave, a week in advance of both store openings. In the UAE, pricing for the Apple Watch Sport will start at 1,399 dirhams for the 38mm model, which is equivalent to approximately $380 in U.S. dollars.

Both new Apple Stores will provide traditional services such as the Genius Bar, Events, Workshops and Personal Setup.

If I were Apple I would have no dealings or sell my products to any country in the Middle East that are repressive to woman or gay people.
If Tim Cook is so anament about gay rights and woman's rights Apple should ban all sales of products and goods !!
I'm so sick of liberal elitist that don't put there money where there mouth is !!
Jobs would have never approved of this deal !!

It's not his company. He runs it, but he can be fired if he isn't doing what the shareholders want. He can't just inject his personal opinions in when it comes to who the company does business with. That's absolutely not what being the CEO of the world's largest corporation is all about.

Also, what good would it do? They would still get Apple's products, or competitor's product which does the same function, one way or another. Besides, women are able to buy and use Apple's products - the same products women in the rest of the world have access to - for their education, enjoyment, whatever. Their products aren't specifically prohibited from certain groups, otherwise they might have more to say on the matter.

I don't agree that Apple withholding sales from the ME would bring about any positive change there in those areas at all. Even if the entire technology industry followed suit and they were reduced to using inferior technology (or privately importing), it would just feel like bullying and snobbishness by foreigners who don't share their culture or understand their religion. You don't make change in foreign places; that's not your business. However, if you give them the right tools and information, you can help them make changes of their own accord. It needs to come from home. They need to realise for themselves why these changes are important and what benefits it has for their society. You can't impose that level of understanding on people.
Score: 13 Votes (Like | Disagree)

mactactic
If I were Apple I would have no dealings or sell my products to any country in the Middle East that are repressive to woman or gay people.
If Tim Cook is so anament about gay rights and woman's rights Apple should ban all sales of products and goods !!
I'm so sick of liberal elitist that don't put there money where there mouth is !!
Jobs would have never approved of this deal !!
Score: 9 Votes (Like | Disagree)

Ugh, it's unfortunate that Apple is giving in to these Stone Age barbarians but I guess money trumps values.

If I were Apple I would have no dealings or sell my products to any country in the Middle East that are repressive to woman or gay people.
If Tim Cook is so anament about gay rights and woman's rights Apple should ban all sales of products and goods !!
I'm so sick of liberal elitist that don't put there money where there mouth is !!
Jobs would have never approved of this deal !!

Doesn't Apple have stores in Russia? Last time I checked, being a homosexual in Russia was pretty rough. Anyway, Apple has been selling to middle east countries for years (online store). Apple is a corporation that relies on money. Hell, Apple has stores in China (one of the most oppressive countries).

If you are really concerned about human rights in the middle east, then you should urge the government to stop buying oil from the middle east (which I am all for).
Score: 6 Votes (Like | Disagree)

Armstrong1889
They offer "Women Only" workshops !!

Friday December 2, 2022 10:54 am PST by Juli Clover
Google is continuing on with its attempt to convince Apple to adopt the RCS messaging standard, publishing a new "it's time for RCS" blog post. Promoted heavily by Google, RCS or Rich Communication Services is a messaging standard that is designed to replace the current SMS messaging standard. It provides support for higher resolution photos and videos, audio messages, and bigger file sizes, ...
Read Full Article • 583 comments