Apple today posted retail job listings for a future store to be located in the United Arab Emirates, indicating that the company may be soon opening its first store in the Middle East. The postings were initially spotted by ifoAppleStore and show typical openings for Specialists, Creatives, and Experts, as well as managerial positions for Store Leader and Market Leader. The report speculates that the store could already be under construction for an opening in February 2015 based on hiring schedules. 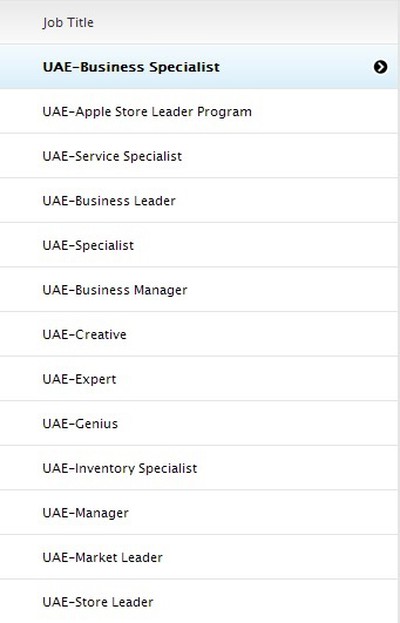 Earlier this year, Apple CEO Tim Cook visited the UAE, posing for photos at various Apple resellers and meeting with UAE Prime Minister Shaikh Mohammed bin Rashid Al Maktoum. While the reason for his visit was unknown, it is possible that Cook may have been meeting with officials about the possibility of an Apple Retail Store in the region.

Additionally, MacRumors received a tip last year that Apple was planning to open a flagship store at The Galleria in Sowwah Square in Abu Dhabi, a luxury mall that opened late last year. The source claimed the store would not open for several years, but noted that it could be Apple's largest retail store to date.

ricci
Good move! These people and visitors to this region are of money and plenty of it! I go their, nice upcoming city! We stopped selling the Hummer, they still buy and love it! Luxury is king and always have been! Perfect fit! I'm sure every kid has a maxed out Mac Pro for their first comp!!
Score: 3 Votes (Like | Disagree)

Punkwaffle
Terrible idea. Why would Apple, a progressive company, want to open a store in a country that was built on and still uses slave labor and oppresses women, gays, and other minorities?

You should troll harder...

Population:
- Dubai (Emirate): 2.1M, it's a much smaller territory than the Emirate of AD and most all of them live in the city proper.
- Abu Dhabi (City): 921K.

Ever been to Abu Dhabi? It's about as stale as month-old bread, feels empty and lifeless. Dubai's the opposite, bustling with people and traffic at all hours.

So I dunno... MAYBE just maybe it'd be a wise move to put the Apple Store in, say, the world's most visited mall (Dubai Mall) than in a new retail outlet in a city fewer people live in and even fewer visit.

Are you serious?? Abu Dhabi is stale and lifeless? You've got to be kidding me! Wow. You know nothing, absolute nonsense. Abu Dhabi is no different than Dubai. AD draws the same amount of international tourists if not even a few more than Dubai.

Figures released by Abu Dhabi Tourism and Culture Authority showed that last year over 2.8 million guests checked into Abu Dhabi's 150 hotels and hotel apartments; a rise of 18% on 2012. And around 3.2 million visitors are expected this year.

If Abu Dhabi is "as stale as month-old bread, feels empty and lifeless" as you have stated, then I would admit that point-blank. But I had to disagree with you because it's not how you described it at all.

Abu Dhabi’s population passes 2.4 million and is growing by the minute

LadyX
Finally!! I've been waiting for this news. We have authorized Apple resellers here but an official Apple retail store will be much better. But I would've liked if they opened the store in Marina Mall instead of The Galleria.

Would be an odd choice to put their first store in AD. Dubai is the economic center and most populous city.

Well since you're looking at it from this point of view, Abu Dhabi is the capital of the UAE and the largest of the seven Emirates. It is also the largest oil producer and the wealthiest Emirate of the UAE. What I'm trying to say is, so what? What's so odd about opening an Apple retail store in Abu Dhabi? And regarding the population, Abu Dhabi's population is at 2.4 million. Dubai's around 2.1M. But does it really matter? No.
Score: 3 Votes (Like | Disagree)

From a party standpoint, they are not the same.

AD is a little more traditional while Dubai looks the other way on certain things.

Why do you think a lot of guys that work for EY were moving to the Jebal Ali marina area.

Oh yeah, I lived in Al Ain for two years.

Yes, you're right. AD is more traditional than Dubai and they want to maintain that. They don't want to turn AD into something like Dubai. Many people as well as citizens say Dubai turned into something like Las Vegas, some like that, a lot are against that description. Abu Dhabi doesn't want that. They're keeping their culture and tradition intact and want to preserve that and many tourists are attracted to that.

I was in both Marina Mall and the Galleria last month. Galleria was dead as a doornail (but admittedly it was during daytime in Ramadan) whereas Marina Mall was full of life.

When I visited iStyle in the Dubai Mall, they I overheard them "advising" a customer and giving totally wrong information how a product worked. In the 30 mins I was there browsing, not 1 person asked if I needed help, and the employee that were chatting to each other didn't seam interested. Having said that, the iStyle in Marina Mall in Abu Dhabi was being renovated and there were 2 or 3 employees standing at a table outside with some hero products and they were very happy to chat with me. Maybe the "I visited the mothership" t-shirt had something to do with it :)

That's why I said it'd be better if they opened the store in the Marina Mall. I went to The Galleria once, it's very luxurious and I loved the view of the sea but not a lot of people go there. Maybe because it's all brand clothing stores and cafés while in Marina Mall you have tech store, cinema, low and high-end clothing stores, etc. I personally didn't like the atmosphere and tone of The Galleria. Plus, it's too far. Marina Mall is in the heart of the city.
Score: 2 Votes (Like | Disagree)

Finally!! This should have been done a long time ago but better late than never I guess :) I hope they open in other Middle East countries like Jordan <3


I know! When I lived in Jordan it was hard to find good support for Apple products. There were two resellers that I knew about, but that was it.
Score: 2 Votes (Like | Disagree)
Read All Comments