Originally tested in an iOS 9 public beta back in August, AT&T ultimately held back on a wide public release for Wi-Fi calling due to its decision to wait for an FCC waiver that would temporarily relieve the carrier of needing to offer support options for deaf and hard-of-hearing people. The Federal Communications Commission's rules state that all calling services need support for a teletypewriter (TTY) service for the deaf, but AT&T wants the old-fashioned TTY replaced with real-time text (RTT) support instead.

Both TTY and RTT offer support for the deaf and hard-of-hearing to conduct non-voice conversations, but AT&T's RTT service wouldn't be ready until 2016, leading to the carrier's request for a temporary waiver from needing to implement TTY support until then. Yesterday, AT&T resubmitted its request for such a waiver to get its Wi-Fi calling service off the ground, simultaneously calling out Sprint and T-Mobile for deciding to move forward with similar services without supporting the FCC's rules (via Fierce Wireless). 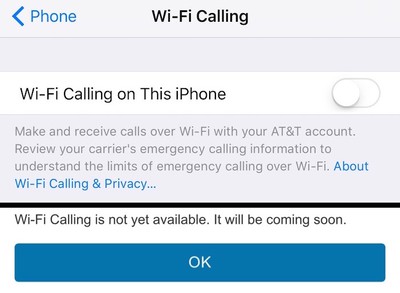 The company stated that the original launch date for Wi-Fi calling was set to be September 25, alongside the launch of the iPhone 6s and iPhone 6s Plus, but without the proper waiver from the Federal Communications Commission, the carrier decided to hold off on the launch of the service for now.

"This past Friday, September 25, was the date on which AT&T intended to introduce Wi-Fi calling services in competition with other competitors in the market, namely T-Mobile and Sprint," AT&T wrote in its filing. "Those carriers have been offering Wi-Fi calling services for a significant period of time, well over a year on Android devices and for months on iOS devices.

Neither of those carriers has approached the FCC to request a waiver of the TTY rules. Because the commission has not granted AT&T's waiver petition, we are not in a position to provide Wi-Fi calling services to our customers even while our competitors provide those services in defiance of the commission's rules."

Wi-Fi calling was introduced into the iOS ecosystem with iOS 8 and lets calls be placed over Wi-Fi instead of a cellular network so users can take advantage of a potentially faster Wi-Fi signal when their carrier's connection strength is particularly weak. Since the feature was made available in the iOS 9 public beta, a limited number of AT&T subscribers have been able to test out Wi-Fi calling on their iPhones despite AT&T's delay of the full rollout.

MLMcMillion
So they'll listen to the FCC when it comes to not providing a service, but blatantly disregard it when it comes to saving money. I see how this works.
Score: 83 Votes (Like | Disagree)

AT&T will get the right to call out unfair advantages with competitors when they stop screwing their customers for marginal profits that don't seem to be reinvested into anything but their self interests.

...I am pretty upset with them and their recent actions right now.
Score: 12 Votes (Like | Disagree)

ThomasJL
I'm so glad the iPhone 6s and 6s Plus have LTE band 12 support, which means T-Mobile customers using those phones will have strong signal indoors. I despise AT&T, so it will be great to see them lose customers due to that.
Score: 12 Votes (Like | Disagree)

This is not unlike some VoIP services that don't support E-911 and they make the user agree that they understand that the service does not support 911 calls. The FCC doesn't stop the use of VoIP phones. The provider simply has to notify the customer about the limitations of their VoIP service.
Score: 12 Votes (Like | Disagree)

My brother is severely hearing impaired and has had hearing aids for life. He's never once used TTY. He always texts just fine. And now there's an app for iOS (or it could be specific to iPhone 6, not entirely sure) that connects directly to his hearing aids for audio. Pretty sweet.

I'm sure he texts just fine now as you say. He would benefit from something like RTT because TTY is extremely slow. RTT would allow him to have audio converted to text in real time instead of having to wait for a message to be composed and then sent back to him. It's faster, it's current, and it's easer. It isn't innovation, it's evolution, creating a better system for those who need it.

I'm asking this in a honest way because I don't understand the hardships the deaf face but is there a need for TTY support any longer? I know we used a TTY years ago with a deaf relative but wouldn't text messaging replace that service entirely? Is this a case where the FCC regulations haven't caught up to modern technology? Again, asking honestly.

You can't text message a business number, a doctor's office, pay a bill over the phone, or a multitude of other services people have to talk on their phones for. This allows all those conversations you and I have to be real time instead of the delay it takes the compose the message and send it back.
Score: 9 Votes (Like | Disagree)

I'm so glad the iPhone 6s and 6s Plus have LTE band 12 support, which means T-Mobile customers using those phones will have strong signal indoors. I despise AT&T, so it will be great to see them lose customers due to that.

I am one of those people. I was with Cingular from the beginning and had unlimited data on AT&T. They lost me as a customer. I'm extremely happy with my 6S on T-Mobile.
Score: 9 Votes (Like | Disagree)
Read All Comments

Sunday August 1, 2021 6:21 am PDT by Sami Fathi
Models of the Apple Watch Series 6 with titanium cases part of the "Apple Watch Edition" collection is currently widely unavailable for pick-up in several of Apple's retail stores in the United States and is unavailable entirely for delivery in major markets. Noted by Bloomberg's Mark Gurman in the latest edition of his "Power On" newsletter, titanium models of the Apple Watch Series 6,...
Read Full Article • 125 comments