Wednesday September 23, 2015 11:02 am PDT by Juli Clover
Apple today released iOS 9.0.1, a minor update that introduces several bug fixes for iOS 9. The iOS 9.0.1 update comes just one week after iOS 9 was released to the public on September 16. 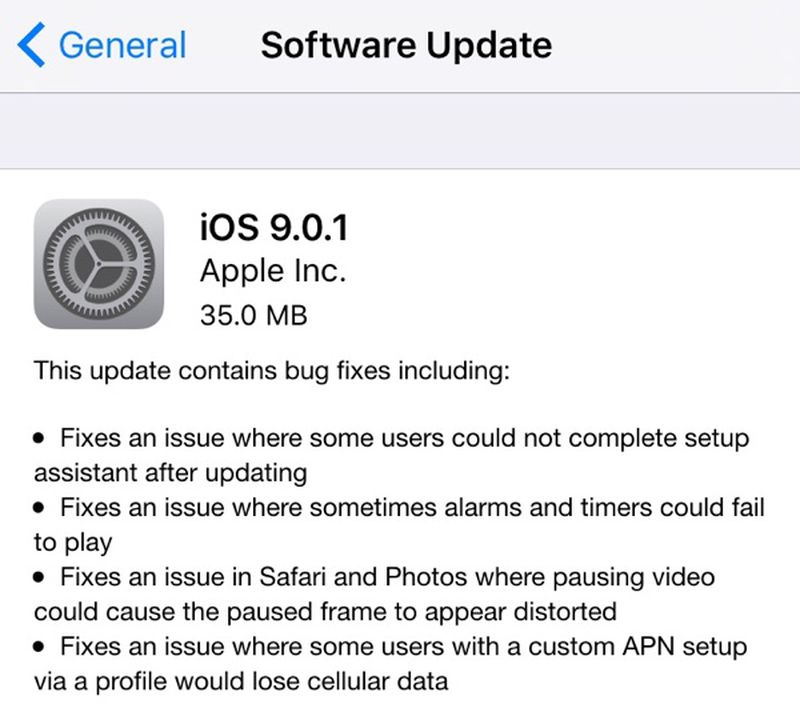 iOS 9.0.1 is a minor update that introduces bug fixes and performance enhancements to iOS 9. iOS 9 is Apple's latest operating system, which focuses on proactivity and intelligence with updates to Siri and Search. It also includes a split-screen multitasking feature for the iPad and updates to several Apple-branded apps.

decimortis
Please select your response for this thread:

Silver Idaten
Someone else want to go ahead and download this just to make sure this doesn't kill the cellular radio again?
Rating: 25 Votes

webberade
I can't wait for all my tech unsavvy friends to throw a hissy fit that "they JUST updated their phone the other day"
Rating: 21 Votes

penajmz
Wondering if this will fix the lag on the 6 Plus.
Rating: 20 Votes


By the way, my 5S was laggy as hell and suffered bad battery life shortly after upgrading to iOS 9. But the lag resolved itself, probably indicating it was due to the revised Spotlight doing a deep re-index, and possibly other internal optimization processes. And the battery life practically doubled after I let it run all the way down after a couple days of annoyance, then charged it all the way back up. Yup, that trick still works, apparently.

Besides those self-fixing glitches and one email account that went wonky (but returned to normal after I deleted and re-entered it), it's been a smooth upgrade, with gratifyingly nice new capabilities.
Rating: 14 Votes

Corrode
Is this the fastest .0.1 release ever?
Rating: 14 Votes

xlost6
Well that well that was quick!
Rating: 11 Votes

Really frustrating. 9.0 has been the buggiest iOS release from Apple thus far [for me].

Corrected that for you.
Rating: 11 Votes

Clearly you are new to Apple and to these forums if you think iOS 9 is the buggiest release ever.

Uhm, take a look at my post history and then we'll talk. I've owned every iPhone and used every version of iOS since day 1. But thanks. :rolleyes:

these software updates are becoming joke; why release two weeks back 9.0 if the 9.0.1 is coming out soon?

Maybe you should switch to Android. There's a good chance you'll never get an update on there.

For the rest of us, I'm grateful that Apple is proactive and provides quick updates.
Rating: 8 Votes