Apple's iOS 8 is installed on 87% of iOS devices a year after its release, according to new numbers shared by Apple on its App Store developer page. The new numbers come on the eve of the launch of Apple's newest mobile operating system, iOS 9. 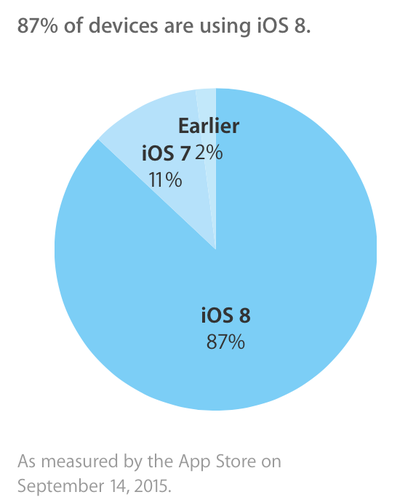 iOS 8 adoption has been somewhat slower than iOS 7, with iOS 8 hitting 72% adoption in January 2015. iOS 7 was at 80% adoption at the same point. Additionally, iOS 8 reached 81% adoption in late April, only growing 6 percentage points in a little over four months.

Comparatively, the latest version of Android (5.1, aka Lollipop) sits at a 5.1% adoption rate. However, Android updates often take a long time to propagate to customers, partly because cell phone manufacturers and cellular carriers must bake in their apps and interfaces into the operating system.

According to mobile analytics firm Mixpanel, iOS 9 currently holds a ~1.04% adoption rate, which includes public beta testers and developers. That number will likely increase dramatically as the operating system will push to iOS users tomorrow, September 16.

naeS1Sean
That moment when you see a 40 year old lady running < iOS 6. Makes me cringe. I just want to steal their phone for an hour and update and organize it...
Score: 23 Votes (Like | Disagree)

CEmajr
Wow, Android is a joke in comparison. Want the latest OS? Buy a new phone.
Score: 18 Votes (Like | Disagree)

That moment when you see a 40 year old lady running < iOS 6. Makes me cringe. I just want to steal their phone for an hour and update and organize it...

Why would you want to ruin the poor lady's phone? You're a meanie.
Score: 15 Votes (Like | Disagree)

Comparatively, the latest version of Android (5.1, aka Lollipop) sits at a 5.1% ('https://developer.android.com/about/dashboards/index.html') adoption rate.

That moment when you see a 40 year old lady running < iOS 6. Makes me cringe. I just want to steal their phone for an hour and update and organize it...

Don't. Someone (aka my aunt) did that to my grandma's 4S, and then Safari was suddenly unstable because – I guess – she got unlucky and had something not go right, and she was asking me what the heck was wrong with it. It's way more important for her that stuff work right than it have the latest features.
Score: 8 Votes (Like | Disagree)
Read All Comments

Wednesday July 8, 2020 3:14 pm PDT by Juli Clover
Apple is working on Macs that use its custom Apple-designed Apple Silicon chips instead of Intel chips, but Apple has committed to continuing to support Thunderbolt, reports The Verge. In a statement, an Apple spokesperson said that Apple's upcoming machines will offer support for Intel's Thunderbolt USB-C standard. "Over a decade ago, Apple partnered with Intel to design and develop...
Read Full Article • 211 comments