New Apple TV First Impressions: Not a 'Revolution,' But Siri and tvOS Shine

One of the big announcements coming out of Apple's "Hey Siri" event in San Francisco today was the new and improved Apple TV, which aims to provide users with a far more robust and unified experience than its predecessor. As it did with the iPad Pro and iPhone 6s, Apple has allowed some journalists hands-on time with the new Apple TV after today's event and subsequently the first impressions of the device have been shared online.

The Verge went hands-on with the new Apple TV, and while they found the new remote to be "frenetic" at first, they noted the sensitive controls are easy to get used to, even in a brief demo environment. The site also liked the slight visual overhaul thanks to tvOS, and called the device a "meaningful" upgrade to the Apple TV line, but was left unsure whether it met Apple's massive vision detailed during today's conference.


Variety's brief demo with the new set-top box found that the overall experience has been uniquely tuned around Siri and Siri's in-depth search parameters. Specifically, the site was a fan of the device's "fast and fluid" interface, along with the new remote control and the possibility of future Apple Watch integration.

Using voice to control Apple TV worked fairly well during my brief hands-on test, which says something: My German accent tends to throw off voice recognition systems, but Siri had no problems searching for foreign comedies when asked to do so.

Apple TV is based on pretty powerful hardware, and that shows when you navigate the device’s home screen. Scrolling through apps with the remote control’s touchpad is fast and fluid, app icons are 3D-animated, and the interface looks a lot lighter than that of the previous-generation Apple TV.

On the downside, Variety noted that much of the in-video alternate functionality shown off by Apple during the media event -- like searching for actors while a movie plays -- is limited to iTunes videos for the time being. The site also found some roadblocks when continuing to inquire into specific categories with Siri, with the voice assistant sometimes stumbling over whether they were beginning a new query or continuing insight into a previous one. In the end, while they liked the brief experience, Variety wasn't sure Apple completely "changed the TV experience," as the company hoped to do.

Siri also stumbled when asked to show TV shows from ABC, something an Apple employee attributed to the fact that the demo was optimized for movies. Also notable: Siri wasn’t actually that smart about connecting the dots. Follow-up questions have to start with certain keywords, otherwise Siri thinks it’s a new question. Launching an app or game requires users to use the word "open," and not "go to." And the MLB app wouldn't open, just because I said "Open MLB.tv," not "Open At Bat."

Apple CEO Tim Cook said Wednesday that no one had changed the TV experience - and the new Apple TV doesn’t really change it either.

SlashGear said the physical Apple TV set-top box "isn't quite as aesthetically pleasing," as the existing version, but thought the brighter tvOS and slick menu controls were far ahead of the current Apple TV. The site also noted the accessibility of the remote's IR blaster -- which allows the small device to control a TV's volume -- and the ability to support MFI-certified controllers, like Bluetooth gamepads, is a plus for anyone looking into the new gaming App Store section of the Apple TV. 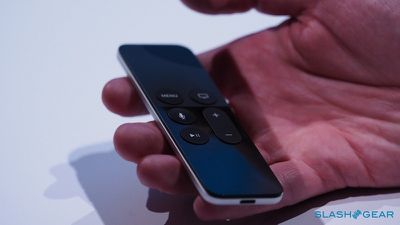 What you do engage with is the new remote control. It feels more like a mashup of a 1st-gen iPod nano and a MacBook trackpad, with the touch surface for navigation being very sensitive: at first, I skittered through the revamped interface, the icons tilting and bobbing as I went.

tvOS - built on top of iOS and with the primary changes being to how easily viewed the interface is from across the room - feels familiar, though the brighter color scheme is a little more engaging than the dour black of the current Apple TV. It also feels a little like Android TV at times.

The new Apple TV will be available in late October for $149 (32GB) and $199 (64GB). Besides TV and movie functionality, Apple introduced a few gaming-centric features today, including unique co-operative play for certain game titles and the announcement of the first gamepad for the new Apple TV.

BWhaler
Instant purchase for me. Love my Apple TV, and a new app store and interface are great advances for me.
Score: 27 Votes (Like | Disagree)

The remote is one of the critical features!, especially since it's your interface with Siri.

The touch pad could be interesting but some of us simply do not like using voice controls. I have zero interest in talking to my tv.
Score: 10 Votes (Like | Disagree)

RDeckard
Don't you geeks clamoring for 4K video realize that you're NOT the norm right now?

It's been said many times that

* 4K content is lacking
* most 4K video you get over streaming services is highly compressed
* many households don't have internet speeds fast enough to ensure a good experience (if the ATV supported 4K do you have any idea how many people would bitch that "this stupid ATV just buffers... and buffers... and buffers...? Hint: a LOT)
* most household services have data caps that would be busted with a lot of 4K streaming
* almost 60% of US adults have NEVER EVEN HEARD OF 4K ('http://www.leichtmanresearch.com/press/031315release.html')

Sure, that % will change over time, but this is like those Android phones touting NFC capabilities a few years ago - when very few retailers could even accept NFC payments.

It makes no sense for Apple to offer that feature when the content, broadband, and broadband businesses aren't ready for it.
Score: 9 Votes (Like | Disagree)

nostaws
I currently have an Apple TV. If I had it all to do over again, I'd get a Roku. Even after the announcement.
Score: 9 Votes (Like | Disagree)

There's not a single app in the app store to take advantage of the A10 chip for next year's iDevices. So why bother building the A10 after this launch?

There's not a single app coded to fully exploit Skylake's completely unique features, so why bother to develop computers with Skylake?

Hardware leads. Roll out advances in hardware and the software and infrastructure plays catch up. It's always been that way.

No people have "force touch" needs but that's coming in the new phone anyway. Pretty much everyone could pay for anything before Apple Pay but Apple Pay was developed anyway. Nobody had or needed touchID but Apple rolled that out anyway. USB3C. Thunderbolt. Lightning. Retina HD or Retina 5K (when retina was apparently the limit of human eyes)

I realize we have to "rally the troops" in support of Apple here but Apple DID EMBRACE 4K today. The iPhone shoots 4K. iMovie will edit 4K shot on the iPhone. Retina 5K iMacs and FCPX also fully support 4K video editing. iTunes will store 4K videos rendered from iMovie or FCPX. There are tons of 4K TVs in the wild from pretty much every manufacturer. What's missing: iPhone shoots 4K, iMovie or FCPX edits 4K, iTunes stores it, Apple TV, 4K TV. Just one crucial link in the chain.
Score: 9 Votes (Like | Disagree)
Read All Comments