We've already seen a number of part leaks from the upcoming "iPhone 6s", and a source has now provided MacRumors with several photos and videos showing how those parts can be combined to build a partially functioning iPhone. Specifically, the new photos and videos reveal an iPhone 6s logic board and display assembly paired with a number of iPhone 6 components such as the rear shell and battery to create a device that starts up enough to be able to display a screen showing a gear icon. 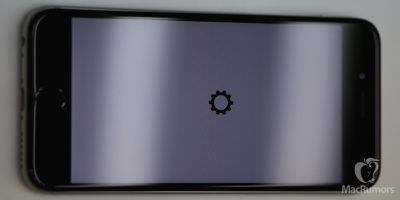 The video shows the device booted to the gear screen and then opened, showing the various iPhone 6s and 6 components laid out and connected inside the rear shell. Several components such as the rear camera are missing, but there are enough parts present to deliver data to the iPhone 6s display.


One heavily rumored feature for the iPhone 6s is support for Force Touch, allowing the device to sense how hard the user is pressing on the display and activate differential controls depending on how much pressure is being applied. While the partially booting phone does not prove Force Touch support is present, there are some definite differences from the iPhone 6 such as the shielding on the rear of the display being glued in place rather than screwed in.

In addition to the iPhone 6s built from parts, we've also received photos of an iPhone 6s logic board showing some details of the device's main components. Previous leaks have shown the logic board to contain Qualcomm's MDM9635M LTE baseband modem to support faster LTE with increased power efficiency, and our own photos have now confirmed the iPhone 6s will also include Qualcomm's WTR3925 radio frequency transceiver chip to pair with the new modem for enhanced cellular network performance.

iPhone 6s logic board (top) with zoom of RF transceiver section (bottom left) showing WTR3925 boxed in red and compared to corresponding portion of iPhone 6 logic board (bottom right) with WTR1625L boxed in blue and companion WFR1620 boxed in yellow
The new chip is fabricated on a smaller and more power efficient 28-nm process, down from the 65-nm process used for the WTR1625L chip found in the iPhone 6 and 6 Plus. Also of note, the new WTR3925 eliminates the need for a separate companion chip (WFR1620 on the iPhone 6) for carrier aggregation, which combines separate spectrums into a single faster connection to increase data speeds and network capacity. By combining the functions of two chips into one on the iPhone 6s, power efficiency and performance are improved while taking up less space on the logic board.

Perhaps the most anticipated part from the iPhone 6s from a technical perspective is the A9 chip that serves as the heart of the device. Unfortunately, the logic board we received pictures of appears to be a pre-production unit that is missing some details including the A9 stamp itself and markings that would reveal how much RAM is included in the package.

Main chips and SIM slots for iPhone 6 (left, via iFixit) and iPhone 6s (right)
We can see, however, that that the A9 package is roughly 10 percent larger in area than the A8 package found in the iPhone 6. The reason for the increased size isn't confirmed, but it's possible Apple has moved some additional functionality into the main chip to increase efficiency and save overall space.

The introduction of the iPhone 6s and 6s Plus is expected to occur in just two weeks at a media event reportedly planned for Wednesday, September 9. The event is also expected to feature several other announcements including a revamped Apple TV set-top box with support for Siri control and third-party apps.

Alex Moran
I hope it is OLED. As much of a hater that I am against Samsung. The S6 display is brilliant
Score: 18 Votes (Like | Disagree)

ouimetnick
Less than a month to go. Looking forward to the event. Hope they provide an English translator this time around.
Score: 13 Votes (Like | Disagree)

I hope it is OLED. As much of a hater that I am against Samsung. The S6 display is brilliant

Is it just me, or does the chassis look black?

Update: Oh, it's only the light in the first pic. In the video it's clearly space gray.

Will Apple change the color of Space Gray again? The iPhone 6 was too light for my taste. Not really gray but silver.

The most recent design (5th and 6th generation) of the iPod touch has gone through three different dark chassis: