Best Buy CEO Hubert Joly today announced that the company plans to accelerate support for the Apple Watch by having the wearable device be sold in every one of its 1,050 retail locations across the United States "by the end of September" (via Fortune).

The move follows Best Buy's initial plan to deploy retail support for the Apple Watch in just 300 of its stores by the holiday season, but recent strong sales of the device have encouraged the retailer to back Apple in not just Apple Watch support, but with all of the Cupertino company's products. 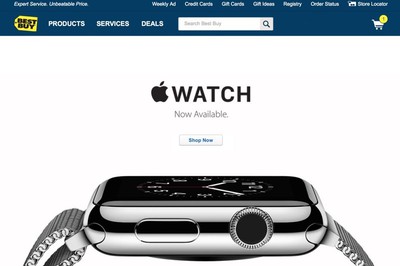 Currently undergoing renovations at 740 locations in the United States are the Apple branded sections of Best Buy's retail stores, "including new fixtures and more display tables for phones, computers, and tablets." The company has already completed the update at 350 of its stores and has plans to get another 170 completed before the holiday shopping rush coming later this year.

The additional display tables are great for the merchandising of Apple Watch, which went on sale at BestBuy.com and in more than 100 of our stores in August. Now, because demand for Apple Watch has been so strong in these stores and online, we are excited to share that beginning September 4 we will be carrying Apple Watch in more than 900 of our big-box stores. Apple Watch will be available in all 1050 of our big-box stores and approximately 30 of our Best Buy Mobile stores by the end of September.

Best Buy began selling the Apple Watch in-store and online in early August, along with a few third-party accessories for the wearable, like charging docks and various bands. The retailer will even begin selling AppleCare and AppleCare+ warranty plans in mid-September, no doubt hitting just in time for the launch of the next generation iPhones. Apple has avoided attaching specific sales figures to the Apple Watch, but Best Buy's doubling down on the company's wearable device is no doubt a sign of the Apple Watch's success.

MR is giving you combined ammunition to hate.
Score: 36 Votes (Like | Disagree)

I have barely seen this device in the wild, if ever. Frankly, not only do I not have the urge to buy it, but I have now completely forgot about the product.

This thing has been a disaster. It's starting to get digs in influential media now too. That's not to say that any smart watch is a hit. None of them are, because they are currently pointless expensive devices with no clear exceptional function. Those who say otherwise must just be trying to justify their 500 dollar iPhone accessory.

Somebody get Best Buy CEO Hubert Joly on the phone Reds622 has barely seen the Apple Watch in the wild, those strong sales must not be real!
Score: 25 Votes (Like | Disagree)

I have barely seen this device in the wild, if ever. Frankly, not only do I not have the urge to buy it, but I have now completely forgot about the product.

This thing has been a disaster. It's starting to get digs in influential media now too. That's not to say that any smart watch is a hit. None of them are, because they are currently pointless expensive devices with no clear exceptional function. Those who say otherwise must just be trying to justify their 500 dollar iPhone accessory.

disaster! Hell I have forgotten what it was already! No hyperbole here, no sir!
Score: 17 Votes (Like | Disagree)

iBlazed
But I thought it was a flop?

In all seriousness, this follows the usual new Apple product pattern. There's an initial rush, followed by a huge decline while the masses have their eyes on the early adopters to see how they like it. Once people start seeing it more in public and see how people use it and love it, they become more inclined to buy one. Now we have a snowball effect going on.
Score: 15 Votes (Like | Disagree)

This thing has been a disaster.

Disaster in which way? Seems to be quite the contrary. But if you're determined to believe negative things, there's not much that will change your mind.

Those who say otherwise must just be trying to justify their 500 dollar iPhone accessory.

Or maybe they actually really like it and wear it every single day for as long as they're awake? Nahh, couldn't be, because YOU'VE never seen one in the wild. :rolleyes:
Score: 14 Votes (Like | Disagree)

HowEver
Everyone who hates, posts here.

Everyone else checks out the watch online, at Best Buy, at Apple Stores, and buys them.

Best Buy has access to actual sales data, or they wouldn't be buying in.