In late July, Best Buy announced plans to begin Apple Watch sales online and in its retail stores beginning on August 7, and as promised, Apple Watch sales have now kicked off, with the device available for purchase on Best Buy's website. 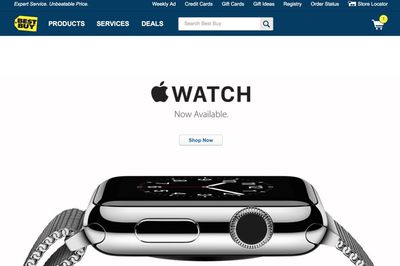 Apple Watch purchases placed online ship immediately, and in-store pickup is also available. Best Buy will likely begin in-store sales of the Apple Watch when participating retail stores open in the morning across the United States. The Apple Watch is available in 100 Best Buy stores, with Best Buy planning to expand retail availability to more than 300 stores over the next few months.

Best Buy is also selling a selection of Apple Watch Sport Bands and the Milanese Loop, plus the company is offering a wide range of Apple Watch accessories from third-party manufacturers, including charging stands, screen protectors, protective cases, and bands.

Best Buy is the first major national retailer aside from Apple to sell the Apple Watch. Since the device's launch in April, it's been limited to the online Apple Store, Apple retail stores, and select boutiques around the world due to constrained supplies.

Apple has managed to ramp up production and catch up with demand rapidly over the past few months, with the expansion to Best Buy coming less than two months after the Apple Watch became available for purchase in Apple's own retail stores.

every once in a while an useless comment comes along that changes nothing
Score: 53 Votes (Like | Disagree)

Personally, I find value in the watch - as do many others. On the contrary, some, or many, don't find value in it. Why is it though that because you don't see the value, that means it automatically has zero value to anyone?

It's made me more active and more interested in my health. It's changed a great deal for me.
Score: 26 Votes (Like | Disagree)

Strange you would say that considering Wristly's recent surveys showed it had a material impact on people's health and habits. And this is just the first gen. Perhaps you just lack the imagination to see how a wearable device that can collect biometric data, encourage users to be more active and offer quick access to information and discreet notifications/reminders can be extremely useful and even revolutionary?

You do realize, you sound like all the iPhone, iPod, iPad, Mac naysayers back in the day, right?
Score: 11 Votes (Like | Disagree)
Read All Comments